A joint Greek-Italian project has been successful in creating urban environments that encourage youth leadership, while strengthening art, music and languages. 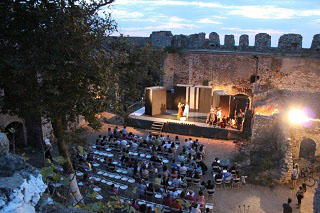 " I MAKE brought together artists who performed in public spaces with a great historical and cultural value. We cannot forget people in less developed areas who are experiencing great difficulties. Embracing culture is a way for these people to grow, live and look at life in a new way. "

The initiative brought together some 150 artists from the Puglia region in Italy and the Ipeiros region in Greece. Together, they formed creative urban laboratories, where youth associations, musical groups, local bands and actors could come together and express themselves through various stage productions, creative workshops and festivals.

The project served the purpose of strengthening and enforcing creativity in marginalised towns in both regions, by holding musical concerts, street and dance performances, and even textile courses. The creative teams also produced various audiovisual films, which were disseminated to a wide audience online.

In all, the “I MAKE” project targeted more than 1.2 million citizens in both regions. It also attracted top tier musical and theatrical production companies both at national and international levels.

As well as performing, those involved also had the chance to learn about stage production, technical support and press relations – all vital elements of running a successful artistic event. Interestingly, many of the artists and technicians who participated in the workshops held over the project's duration are now employed in the creative and cultural industries.

The pinnacle of the I MAKE project was its two international art festivals held in Preveza, Greece, and Putignano, Italy, in September 2013. Both events were organised with much local help, while several historic buildings no longer in use were rejuvenated for the occasion. In fact, the “I MAKE” team has completely restored an important municipal building in Putignano, transforming into a centre for young artists, which the organisers will use for holding events and artistic productions.

I MAKE grew out of the need to stem the flow of youth emigration from both regions. By improving the opportunities for artists in the region, this encourages more young people to stay and enhances growth in the creative sector, which is seen as an important and growing part of the Mediterranean and global economy.

Total investment for the project “I MAKE” is EUR 1 326 790, of which the EU’s European Regional Development Fund is contributing EUR 995 092 from the Operational Programme “Greece-Italy” for the 2007 to 2013 programming period.