At Méaulte, training means innovation thanks to IndustriLab, which brings together researchers and people working in industry

Supported by the Hauts-de-France region, the IndustriLab platform in Méaulte welcomes tens of partners. Large and small companies, universities, engineering schools, training centres, vocational schools, local authorities and the State all work together on innovative collaborative projects. Engineers and researchers test their innovations in real time in a virtual reality space. Large companies pool their equipment, which SMEs can use at a lower cost. High school students are trained in industrial boiler making and aeronautical design. There are six IndustriLab agents who coordinate the whole process. 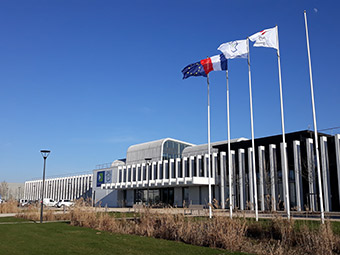 " Industrilab is a technology transfer platform that makes it possible to initiate and support R&D projects in companies, to facilitate technology transfer in SMEs, and to teach by raising awareness of the various trades in the industry, which is also high technology. Another advantage is that IndustriLab broadens the regional training apparatus thanks to the Henry Potez vocational school and the Form'aéro training centre. "

Before coming together in a 9300 m2 building, IndustriLab set up collaborative calls for research, development and innovation projects involving companies and universities. These projects, which have been supported since 2010 by the former Picardy Region (now Hauts-de-France), have resulted in collaborations that were so fruitful, it became evident that premises were needed.

And so the IndustriLab innovation and professional training platform was born, which was inaugurated in May 2015 in Méaulte. It allows the industrial, scientific, academic and educational communities to combine their expertise.

Since then, a dozen companies have set up in IndustriLab – aeronautics or robotics manufacturers, and design offices. "We are here to enable them to benefit from a dynamic, which they can then draw upon to become stronger," explains Arnaud Riquier, Director of IndustriLab, and Director of the Innovation and Industrial Performance Department for the Hauts-de-France region. Tenants can stay from just a few months for up to three years. The exception to this is Stelia Aerospace, which has been involved in the project from the beginning. "Stelia develops R&D and R&T activities in several areas of industry 4.0, including robotics and composites. Part of the time, they make their equipment available to other partners, who would otherwise not be able to access it. These include, for example, fibre placement robots and autoclave robots, which can be used for R&T purposes by companies that develop composite parts and wish to conduct tests," explains Arnaud Riquier.

Between the high school students, engineers from Stelia, the employees of the tenant companies, and the six employees working for the region, there are 200 people working at IndustriLab every day. The site receives more than 10,000 visitors per year.

IndustriLab includes workshops, offices, exhibition areas, meeting and conference rooms as well as a space specially equipped for ongoing training. In addition, there are two virtual reality rooms (Cave and Cadwall), which, when used with glasses and sensors, can reproduce the gestures made. "They are used by companies to model new parts and test their resistance. They also make it possible to adapt new production lines," explains Arnaud Riquier.

The challenge now is to diversify the sectors in order to attract partners from beyond the aeronautics sector.

A total investment of EUR 18 749 428 was ploughed in the "IndustriLab in Méaulte: a centre of national importance in Hauts-de-France-Picardie" project. The European Regional Development Fund contributed EUR 6 466 500 under the Picardy operational programme for the 2007-2013 programming period.

Nord-Pas-de-Calais
View programmes for this region