The Hydro – BPT project looks at innovative ways of retrieving energy from various potential micro – hydropower sites in Wales and Ireland, which could reduce CO2 emissions by over 10 000 tonnes per year. 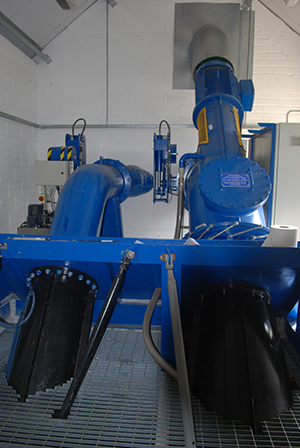 The potential for micro-hydropower energy recovery in water networks in Ireland and Wales is significant, using turbines such as this one. ©Aongus McNabola

" The HydroBPT project team were able to examine the technical and economic viability of 238 potential sites for energy recovery in Ireland and Wales. Of these more than 80 were economically viable and would result in an energy saving of over 20 GWh of electricity in the region, if exploited. This would amount to an annual saving of more than EUR 2.5 million in electricity costs for water companies and a reduction in CO2 emissions of more than 10,000 tonnes. "

Up until now, recycling this energy has not been possible as traditional turbine technology is not always suited to water network sites, these being too large and/or costly. But Hydro – BPT have developed a new concept which allows waste energy to be recovered without this problem, at least in small-scale hydropower plants.

In Wales the leader of this initiative is Bangor University and in Ireland it is Trinity College Dublin.
Up to 80 sites have been identified which are suitable for implementing the new technology. Although actually installing the systems is not a part of the Hydro – BPT project, a pilot plant will be built to test out the technology.

One of the aims of the project was to generate stakeholder interest in the new technology, so that Irish and Welsh businesses could begin implementation of Hydro-BPTS in suitable areas. The partnership between the two universities has already attracted the attention of private companies, such as Diageo and Intel, and Welsh Water and Irish Water have also been involved.

An added bonus is that cooperation with these enterprises has also led to an untapped source of ideas for the development of new spin-off projects, which were not foreseen in the original proposal.

Cooperating across the Irish Sea

The project only looked at hydropower sites in the UK and Ireland, but coordinators say that there is no reason why this technology could not be brought to mainland Europe and beyond. For the future, the coordinators hope that further refinements to the process will mean that the technology could soon become applicable to even more water network sites, leading to an even bigger increase in the amount of energy saved.

Total investment for the project “Hydro-BPT” is EUR 974 907, of which the EU’s European Regional Development Fund is contributing EUR 625 721 from the Operational Programme “Ireland-Wales” for the 2007 to 2013 programming period.