Linking citizens across the Danube

Transport links between two towns on either side of the Danube River have been upgraded as part of a project to increase cross border trade and mobility, and to revitalise an important connection point between Romania and Bulgaria. 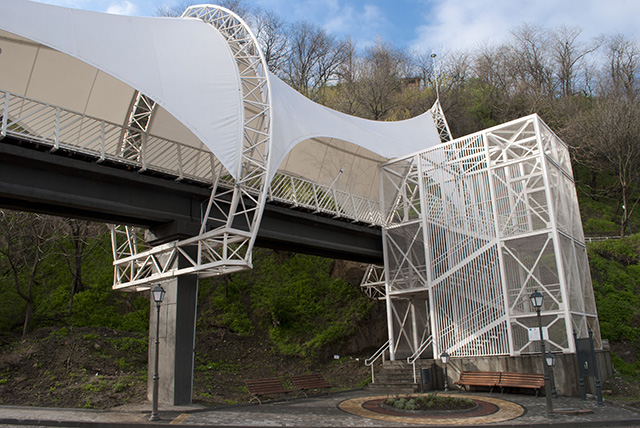 The pedestrian overpass connecting Kaleto Park in Svishtov with the port complex is accessible for people with reduced mobility. ©Svishtov Municipality

" Transport infrastructure has been reconstructed, accessibility for disabled people improved and various information initiatives launched, the most attractive being the placement of electronic information boards. A joint cross-border transport strategy has been developed. As a result, the flow of passengers has increased many times, with the area around the port also now popular among the local population for walks and recreation. "

Improved access to the ferry that connects Svishtov – a town in northern Bulgaria – and Zimnicea – on the opposite side of the river in Romania – has been achieved through repaving sidewalks and streets and rebuilding a pedestrian overpass that connects the centre of Svishtov with the port.

Parking for 15 for cars and two buses at Svishtov’s port has been created, while seven touchscreens have been introduced to provide better passenger information.

The EUR 2.5 million scheme, part-funded by the European Regional Development Fund, has successfully encouraged the movement of both goods and people between the towns by improving access, reducing travel time and making the port area a more attractive destination.

The need for action

Up until this project, there had been no joint strategy to address transport issues in the cross-border area. For decades, both ports on either side of the Danube were primarily industrial, featuring warehouses and infrastructure more suited to heavy shipping and cargo than foot passengers.

This gave new arrivals to Svishtov and Zimnicea a rather unappealing first impression, with limited accessibility to the towns and a lack of information for potential tourists. It also limited the potential for cross-border trade.

The accession of Bulgaria and Romania to the EU provided the first key impetus for action by removing obstacles to the free movement of people and goods in the border region and opening up the region to business and tourism. It was recognised however that tapping the full economic potential of the Svishtov-Zimnicea cross-border region would only be achieved by first putting place adequate infrastructure.

The completion of this project is a key step in this direction. The regeneration of the port area will make cross-border mobility easier and more attractive, thus facilitating greater interaction between businesses and public partners on both sides of the river and enabling tourism to flourish.

It also opens the door to the establishment of a long-term sustainable common transport policy in the Svishtov - Zimnicea area.

Total investment for the project “Improvement of the cross border mobility in Svishtov - Zimich area through development and reconstruction of main segments of the transport infrastructure” is EUR 2 531 423, with the EU’s European Regional Development Fund contributing EUR 2 138 040 through the “Romania-Bulgaria” Operational Programme for the 2007- 2013 programming period.