‘ReNEW’ project aims to turn waste into a valuable resource

The Resource Innovation Network for European Waste (ReNEW) is ensuring we make the most of what we throw away. 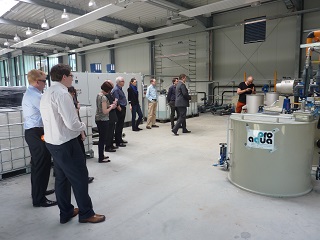 A tour of a centre of research and expertise built on a former landfill site in Leppe, Germany. ©Nick Johnston

" [The] ReNEW study further provides an insight into the ‘art of the possible’ that will help in formulating a future Northern Ireland strategy as we look at ways to become more sustainable in the use of our resources. As we move towards a circular economy in the North, we all need to see waste as a valuable resource, play our part in reducing the amount of waste being sent to landfill and learn from what has proved successful in other jurisdictions. "

North West Europe is a highly-urbanised and industrially-productive region, generating large volumes of waste each year. The ReNEW network of organisations, led by Queen's University Belfast, is investigating how both the economy and environment can benefit from resources drawn from waste.

For example, the bark from felled trees currently has a low economic value and is often burned or left in the forest to rot, but valuable products can be obtained from it such as flavouring agents and small carbohydrates. ReNEW members are working to make this a more viable solution because these resources could have applications in industries including cosmetics, food and biofuels.

The project brings together research organisations, small and medium-sized businesses and public bodies in the UK, Belgium, Germany and Ireland, all of which are working on various projects with the goal of turning waste into a resource. The sharing of information between these transnational and inter-disciplinary organisations is intended to accelerate innovation in this field.

The project is also working to support the development of the “circular economy” in which as little as possible goes to waste. By working with this network of businesses, it ensures the project’s research can be quickly absorbed into the marketplace.

Total investment for the project “ReNEW – Resource Innovation Network for European Waste” is EUR 4 860 000, of which the EU’s European Regional Development Fund is contributing EUR 2 430 000 from the Operational Programme “North West Europe” for the programming period 2007-2013, under priority axis “Developing the NWE knowledge-based economy by capitalising on our capacity for innovation”.