The EU-funded Together project has financed restoration work and development of tourist infrastructure at two valuable historical sites around the Bulgarian-Turkish border: the fortress at Aquae Calidae, near the Bulgarian city of Burgas, and the Monastery of St. Nicholas at Kıyıköy, Turkey. The improvements should attract more visitors to the sites and the wider cross-border region. 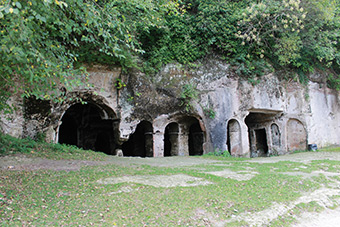 The EU-funded Together project has financed restoration work and development of tourist infrastructure: the fortress at Aquae Calidae, near the Bulgarian city of Burgas, and the Monastery of St. Nicholas at Kıyıköy, Turkey ©Together Project

" The two sites attract large numbers of visitors due to their location. The creation of better conditions for exploring the sites will offer added value for group and individual tourists, who will be able to see the archaeological structures up close under more secure and visitor-friendly conditions. The digital presentation of artefacts will allow the creation of a long-term, high-quality product with both scientific and tourist value. "

Together’s activities include conservation and restoration of the archaeological remains at Aquae Calidae, and construction of a 1 km access road, footpaths, parking and street lighting at the Monastery of St. Nicholas.

The project is also digitising 100 cultural heritage items and making them accessible remotely, via a system composed of a server, devices for 3D scanning and data storage and processing, and two touchscreen information points set up at the Regional Historical Museum in Burgas and Aquae Calidae.

The Aquae Calidae fortress surrounds the ancient city of Aquae Calidae, known for its thermal baths, while the Monastery of St. Nicholas is built into a huge rock. They were chosen for the project due to their cultural and historical significance and attractiveness to tourists, and also because they date from the same period – the reign of Emperor Justinian I (527-565 AD).

Aquae Calidae shows evidence of constant human presence from early antiquity to the present day, making it a key archaeological site. After each season, finds are gathered for conservation and storage at the Regional Historical Museum as, due to their condition and legal requirements, they cannot be displayed for visitors on site.

Digitalisation of such artefacts presents them in an attractive and user-friendly way. Information is structured in line with relevant Bulgarian museology and cultural heritage regulations and made available in Bulgarian and English. After seeing an object at an information point or online, visitors can find out where it was discovered and to which period of the site’s development it corresponds.

The system allows for inclusion of new content, which can be used for fostering cultural exchange in line with the needs and interests of various target groups, particularly young people, and future historical research. It also minimises threats to the artefacts arising from exposure to external conditions.

Another element of the work was the organisation of an international conference on management of cultural heritage and promotion of its touristic value, featuring archaeology, conservation and restoration experts who provided recommendations for preservation of the sites. Dissemination of the results is carried out on both sides of the border through production of publicity material, scientific publications and cultural heritage reports.

The project will lead to the creation of a joint tourist offer aimed at promoting the area and improving access to cultural and historical landmarks. It is expected to increase visitor numbers at the two sites by 30 %, bringing economic benefits for local people.

The cooperation between the two partners – the Burgas Regional Historical Museum and the Kirklareli Directorate of Culture and Tourism – has led to the launch of a new project involving the municipalities of Kameno in Bulgaria and Kıyıköy in Turkey, which will build on the outcomes of Together.

Total investment for the project “Together - Common cultural and historical heritage beyond the borders” is EUR 486 735, with the EU’s European Regional Development Fund contributing            EUR 413 725 through the “IPA CBC Bulgaria - Turkey” Operational Programme for the 2014-2020 programming period. The investment falls under the priority “Sustainable Tourism”.