Going green on the Turkish-Bulgarian border

Through the Green project, two municipalities on the Turkish-Bulgarian border encouraged environmentally sustainable development with small-scale investment in green infrastructure in the cross-border area. 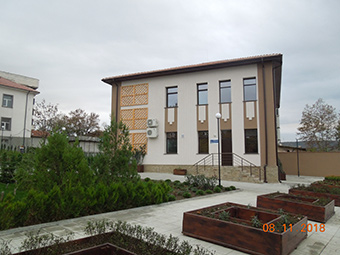 " We see our work on the project as the best initiative to implement some of the key priorities in the field of sustainable development. We are proud that the project has been implemented under the Interreg-IPA Cross-border Cooperation Bulgaria-Turkey programme, because of its huge potential to enhance the active cooperation between the responsible institutions, NGOs, associations of producers, and all other stakeholders. "

The Green project – short for Growth, Responsibility, Partnership, Ecology, Nature – brought together the municipalities of Pinarhisar in Turkey and Sredets in Bulgaria to increase cross-border investments in green infrastructure, raise public awareness and motivate the region’s youth to tackle environmental issues.

EU funds were used to renovate and reconstruct a dilapidated double-storey building in Sredets and turn it into the Green House, and build an ecological centre in Pinarhisar for the youth. These two venues are used for cross-border training and networking, workshops and educational activities on sustainable eco-development in the region.

The Green House has special zones outside for organic agriculture. Endangered species are protected in the surrounding area. The house is accessible to people with disabilities and serves as a base for four newly established eco-clubs, each of which has taken on environmental pilot projects.

One of the clubs, called Green Gold of Strandja, is working on the conservation, reproduction and reintroduction of the Hermann’s tortoise, also known as the Dalmatian tortoise, because of the black flecks on their shells. Members of the White Stork club are monitoring this bird and its numbers. The other two – Eco-Academy and Eco-Patrols – monitor pollution in the region by mapping illegal landfills and organising actions for waste removal.

The project foresees membership at both locations to increase by 150 people annually, gradually improving the region’s capacity to better conserve its natural resources.

Since the project was set up, “Green Weeks” have been organised twice a year in both locations to discuss climate change, the conservation of the region’s nature and protected areas, and host any related activities. Green Weeks videos are broadcast on a dedicated YouTube channel, to further increase awareness of these issues among the local population.

Another initiative established through the project is a joint youth happening called “Kick the Carbon Habit”, aimed at making people aware of their personal carbon footprint and contribution to global warming. The goal is to get people to reduce their carbon footprint.

Both municipalities shared the same strengths that inspired them to work together, such as the region’s unique biodiversity and eco-systems and active youth communities. The project’s efforts have made locals in the region more environmentally aware and contributed to educating young people about nature conservation.