A major project backed by the ERDF is providing the last section of platform for completion of the railway line between the cities of Antequera and Granada in southern Spain. The project includes various supplies, track assembly, electrification, signalling and telecommunications installations. 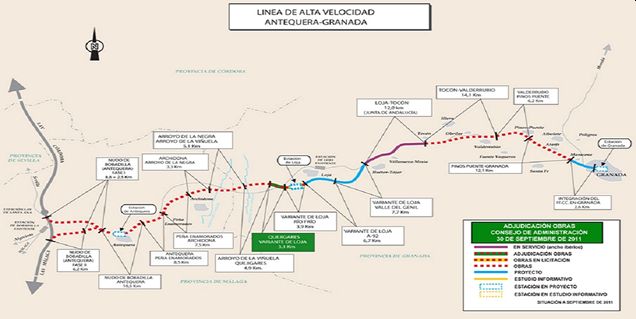 The project will complete the railway link between Antequera and Granada, in southern Spain. ©European Union

This is third and final phase of a wider scheme for the construction of 121.2 km of high-speed, double-track railway line between Antequera and Granada. The new electrified line allows trains to run in conditions of safety and comfort at maximum speeds of 300 km/h.

This project contributes to meeting the wider scheme’s objectives. The high-speed line will help improve connections in the EU’s Trans-European Transport Network (TEN-T). It will contribute to a significant reduction in travel times between the main cities of the Andalusian corridor and the Mediterranean. More specifically, the new line plays a key role in establishing a new high-speed railway connection between Madrid, Córdoba and Malaga Granada.

Other benefits delivered through the wider scheme include:

The provision of modern railway infrastructure is expected to eliminate transport bottlenecks and boost economic activity in south-western Europe.

Andalucía View programmes for this region