Poland and Slovakia have joined forces to construct 60 km of cycling paths and related infrastructure in the region around the Tatras mountains. This is effectively the second stage of a wider scheme which provides for the creation of a loop of more than 250 km of cycling paths, some of which can also be used for skiing and running. The aim is to make this beautiful region and its cultural assets more accessible for locals and tourists alike. 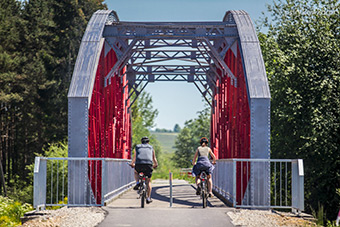 " If you wonder how to combine active and healthy recreation with discovering unknown places and unique heritage objects, admiration of wonderful landscapes and natural variety, visit the Historical, Cultural and Natural Cycling Route around the Tatras. Now, with more than 160 km of cycling paths with infrastructure for cyclists, residents and tourists can explore the Polish-Slovak border region on bikes and see exceptional places and unique cultural attractions in the area. "

As well as laying down the cycle paths, the second stage of this project provided for the construction of 14 new resting places and a free park-and-ride facility. Activities were carried out to promote the route. The dedicated website – www.szlakwokoltatr.eu – has been overhauled and extended. It now includes comprehensive information about the trail and nearby local attractions.

In addition, maps and guidebooks about the route and the area it covers have been published in traditional paper format and as e-books. The project team organised a competition to design the cycling trail’s logo. Plus, a series of events are being held in 2019 for representatives from local authorities and tourism bodies to showcase the cycling route and demonstrate the new infrastructure.

The work complements stage one of the project, which was completed in 2015. It provides nearly 100 km of paths, including a 35 km cross-border section built on the embankment of a former railway line that dates back to the Austro-Hungarian Empire. During stage one bridges were repaired and 15 resting places developed.

The goal of the project is to bring more people into the region around the Tatras to enjoy its landscapes, historical sites and history. The area boasts 15 objects that are included in the UNESCO World Heritage List, along with old city complexes, centres of folk art, castles, and wooden churches that are unique to this part of the world. The new facilities should act as a catalyst for business development in sectors like food and accommodation, guide services, and bike and ski rentals.

A survey of bike traffic reveals that the route is already being used by around 90 000 people per year. Moreover, it is not just drawing in keen cyclists. Runners, roller-skaters and – in winter – skiers are enjoying sections of the track. Various races, runs and cycling events are regularly organised along the trail.

The project is managed by the European Grouping of Territorial Cooperation TATRY – a joint Polish-Slovakian legal entity established under EU law.

Total investment for the project “Cycling route around the Tatras (stage 2)” is EUR 5 892 204, with the EU’s European Regional Development Fund contributing EUR 4 885 762 through the “Interreg V-A Poland-Slovakia” Operational Programme for the 2014-2020 programming period. The investment falls under the priority “Protection and development of the cross-border area's natural environmental and cultural heritage ”