The SOS project set out to better preserve and manage the shared history and cultural heritage in the cross-border area of Slavonija and Baranja in Croatia and Vojvodina in Serbia, dating from the shared secession period of the Austro-Hungarian Empire. It serves as an example of promoting the use of EU funds for the reconstruction, restoration and valorisation of cultural heritage and touristic usage. 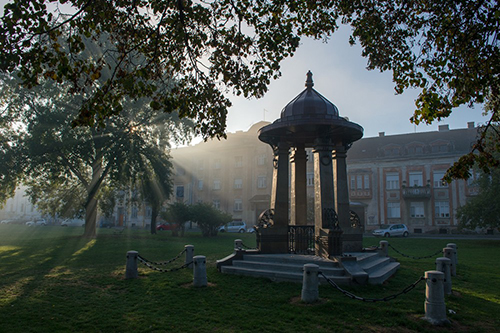 The secession water well, near the river Drava, in Osijek. ©City of Osijek Tourist Board

" The project has created the avalanche of popularisation of Secession cultural heritage in Osijek. It has resulted in a series of columns in local and regional newspapers. Citizens and tourists were eager to participate in local events and the storytelling programme is highly appreciated. "

Short for Subotica Osijek Secession, the SOS. project focused on the shared history and architectural visual identity of the cities of Subotica in Serbia and Osijek in Croatia. The project revitalised existing architectural landmarks from the secession period and developed a touristic thematic route.

The project set up several tourist itineraries, with signs and interactive touchscreen displays that provide information about the period and its remaining landmarks. Jointly organised storytelling programmes were set up for visitors and tourists, and souvenirs and jewellery with motifs were developed.

To promote the new thematic route and create more awareness of the importance of the secession period in the region, the project organised a travelling roadshow exhibition. This passed through Osijek and Zagreb in Croatia; through Pecs, Kecskemet and Szeged in Hungary; and through Subotica, Novi Sad and Belgrade in Serbia.

The SOS. project arranged two educational modules for employees in the culture and tourism sectors of both cities, to strengthen their cultural management and presentation skills of secession heritage.

In Subotica, the project helped elaborate the reconstruction and restoration of the historic city hall, one of the country’s more important cultural monuments that dates back to the beginning of the 20th century. The restoration process was documented to serve as the basis for the development, restoration and touristic valorisation of other regional architecture from the same period.

In Osijek, the Sakuntala park was renovated. It is an important representation of the secession for the city’s urban architecture. It now features 15 new parking spaces and a new garden pavilion. All electrical and water supply installations were renewed and new public lightning was installed as well. The park’s renovation is part of a larger project aimed at redeveloping the city’s Secession Avenue, where more buildings of the same period are located.

Both Serbia and Croatia share a cultural and architectural history dating back to the end of the 19th and the beginning of the 20th century, when several parts of both countries were still under Austro-Hungarian reign. At that time, several architects from the empire started constructing buildings in what is commonly known as the secession art style. In the case of Subotica, this type of architecture mixes traditional elements of the art nouveau movement with both Hungarian folk art and oriental shapes and patterns.

The SOS. project has reinforced the visibility of that valuable cultural heritage by connecting the two cities and their shared visual identity. Through the project’s efforts in popularising the region’s rich cultural heritage, the cross-border area has become more attractive for tourists. The project’s results have also been widely covered in local and regional media outlets, which has resulted in more visitors passing through the region.

Total investment for the project “S.O.S. – Subotica Osijek Secession Tourist Route” is EUR 1 066 007, with the EU’s European Regional Development Fund and Instrument for Pre-Accession Assistance II contributing EUR 906 106 through the Interreg IPA Cross-border Cooperation Programme Croatia-Serbia for the 2014-2020 programming period. The investment falls under the priority “Jobs, Growth and Investment”.

Tourist Board of the City of Osijek