Tourism has increased in the Bulgaria-Serbia cross-border region thanks to the reconstruction of two culturally important historic sites. The early Christian basilica in the Castra ad Montanesium fortress in Montana, Bulgaria, and the Fortress of Kale in the city of Pirot, Serbia, have been conserved, protected and exhibited. 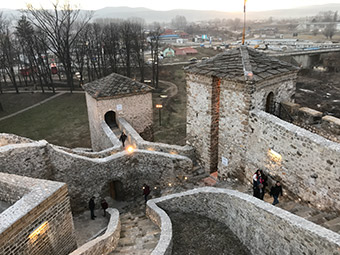 The Fortress of Kale in the City of Pirot, Serbia ©Aleksander Ciric and Deyan Dimitrov

" This grandiose edifice is becoming increasingly attractive for tourists and visitors. Alongside other cultural attractions, we would like to see Momchilo’s fortress contribute to touristic and economic development of the city. The fact that Pirot possesses the Film Friendly Certificate, contributes to the entire endeavour. The certificate was issued by the Serbian Film Association to 20 locations, the Serbian medieval fortress in Pirot being one of them. "

Before the implementation of the project, the public were unable to access the two historic sites for safety reasons. The sites are in attractive locations in both cities. The renovated buildings have become centres of entertainment, education and tourism.

The early Christian basilica in Montana was restored from its foundation, while the entire building of the Fortress of Kale was reconstructed. The project also created a tourist guide for the two cities, and designed new exhibits in the Fortress of Kale. A mobile app for the fortress was developed, incorporating virtual 3D tours which take visitors back in time.

Both sites are considered culturally important and are protected by both countries. This meant the reconstructive work had to maintain the original appearance of the buildings and follow specific guidelines.

The Castra ad Montanesium is a Roman complex. The project allowed large-scale reconstruction of the early Christian basilica, built by Constantine the Great in 306-337 AD. Visitors pass through the renovated basilica, which is connected to the previously restored fortress. Lighting and video surveillance equipment were installed to protect the complex. The gardens around the basilica were reforested and landscaped.

Fortress Kale, also known as Momchilo’s fortress, was a medieval military stronghold. The restoration preserved the authenticity of the site as part of the urban architecture and spatial vision of the city of Pirot.

The development of exhibitions inside the fortress aims to bring visitors closer to Pirot’s history, with different exhibits for tourists, children and researchers. These include virtual and extended reality presentations of the fortress. The mobile application called Momcilo City contains virtual 3D tours that take visitors through the Roman period and the fourteenth century to the present day.

The project directly created three jobs in the fortress in Pirot, with plans to hire another two employees during 2019. The increase in the number of visitors inboth areas has also contributed to the expansion of private companies offering tourism services.

Total investment for the project “Conservation, revitalization and exhibition of Early Christian basilica and medieval fortress in cross border region” is EUR 695 167, with the EU’s European Regional Development Fund contributing EUR EUR 505 263 through the “Instrument for Pre-accession Assistance II” Operational Programme for the 2014-2020 programming period. The investment falls under the priority axis 1: Sustainable tourism.