The MC2 project encourages towns and cities in the north-west of the Iberian Peninsula to shape their future together. It is led by Eixo Atlántico, an association of local authorities in the adjoining territories of North Portugal and Galicia, in Spain. 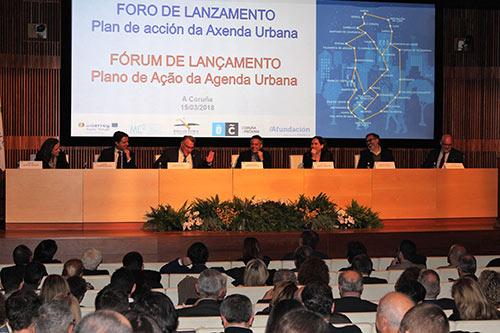 " MC2 has created Europe’s first cross-border urban agenda, which is dedicated to cohesive, inclusive and sustainable development of the urban system spanning Galicia and North Portugal. "

Eixo Atlántico — the Atlantic Axis association — champions coordinated development of the territories in the north-west of the Iberian Peninsula and cohesive organisation of the urban system in this region. In total, 36 local authorities are involved, representing cities such as Porto, Santiago de Compostela, Vigo and Vila Nova de Gaia.

The ERDF-backed project Masa crítica y cooperación (Critical mass and cooperation — MC2) has enabled the municipalities cooperating in Eixo Atlántico to develop a shared agenda for urban development. It has produced an action plan for the implementation of this agenda. For the purposes of the project, the entire urban system in the combined territory of the participating local authorities was considered as a single city.

Particular care was taken to align the urban agenda with those set out by the EU and the United Nations, and the UN’s 2030 Agenda for Sustainable Development. The strategy rests on five pillars:

The project has developed innovative methodology enabling individual local authorities to draw up customised versions of the MC2 action plan that take their territories’ respective priorities and specificities into account. While challenges such as climate change are not contained by national or municipal borders, practical responses to specific issues will necessarily differ from one city to another, depending on factors such as size or location.

The flexible approach championed by MC2 will generate different versions of the strategy, but these adaptations — all of which are inspired by the same objectives — are expected to converge in support of coherent development across the urban system covered by Eixo Atlántico. Pilot initiatives are underway to demonstrate the feasibility of a number of measures outlined in the cross-border action plan.

MC2’s cross-border urban agenda builds on extensive public consultations and events, meetings with academics and policy-makers, and interaction with experts at the European Commission, the United Nations and the World Bank. It is the first of its kind in Europe, and indeed the first for a wider urban system encompassing several towns and cities. Other territories may soon follow suit. The approach was designed to be transferable.

One such transfer was factored in from the outset: AIMRD, the association of municipalities along the Duero/Douro river, is a partner in MC2, in view of a potential similar cross-border initiative involving North Portugal and the adjoining Spanish region of Castilla y Léon.

In addition, the approach is being considered for an initiative in South America, in border areas of MERCOSUR countries Argentina, Brazil, Paraguay and Uruguay.

Total investment for the project “Boosting critical mass and cooperation within the Eixo Atlantico urban system (MC2 — critical mass and cooperation)” is EUR 3 325 100, with the EU’s European Regional Development Fund contributing EUR 2 493 825 through the “Interreg V-A Spain-Portugal (POCTEP)” Operational Programme for the 2014-2020 programming period. The investment falls under the priority “Territorial cohesion”.