Situated in the east of Poland’s Mazowieckie region, near the banks of the Bug River, parts of the historic Korczew palace and park complex have been restored to their original splendor under an EU-funded project. Two galleries linking the central structure with the eastern and western wings were rebuilt: the former is to house the orangery, while the latter will contain an arts library. Outside, the rear terrace and the steps leading from the park were reconstructed; the facade of the central complex was painted; and a retaining wall and a fence in the park were repaired. 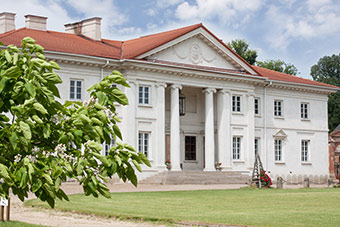 " This grant has greatly sped up the renovation work that the family, descendants of the pre-war owners, have been carrying out for the past 30 years. We still have other buildings in the grounds to work on, but are now much closer to our goal of creating a major tourist destination which would draw people to the Bug Valley region. In the first six months since work finished, we have seen a big increase in tourist numbers, media interest and offers of co-operation from other institutions and artists. Thanks to the availability of new exhibition spaces, we have hosted three temporary exhibitions within a year, and a new permanent one. "

The first floor, all of which had previously been disused except for the hexagonal office, was renovated to provide additional exhibition space and a theatre room. Further work on the first floor covered a foyer and the Norwid room, named after Polish poet Cyprian Kamil Norwid.

Fittings were purchased: a piano, fountains and plants in decorative pots for the orangery; chairs, a sound system, a multimedia projector and an electric screen for the exhibition and theatre rooms; and printed copies of Norwid's letters for the Norwid room.

Built in 1734 by Wiktoryn Kuczyński, it was under the ownership of his great-grandson, Aleksander, in the mid-19th century that Korczew palace acquired its definitive character. Aleksander employed architect Franciszek Jaszczołd, who created a new layout for the park and designed the orangery and ‘Siberia’, a summer house in which Aleksander's wife Joanna lived after her husband's death in 1858, during which time she corresponded with Norwid.

Aleksander and Joanna’s daughter, Ludwika married Count Tadeusz Ostrowski and the palace remained in the hands of the Ostrowski family until they went into exile at the start of World War II. It fell into disrepair during the communist period, before the Ostrowskis returned to Poland in 1989 and began restoring it.

Prior to the launch of the project, much of the ground floor, including the ballroom, Chinese room and Pompeiian room, was already open to visitors. The palace hosts small weddings and conferences in the theatre room. Accommodation is available in the gatehouse and the old forge, where the restaurant is located.

By increasing the amount of space available for use in the palace, the project has helped achieve this aim. At the same time, the work has enhanced the attractiveness to tourists of both the complex itself and the wider eastern Mazowieckie region, thereby boosting visitor numbers.

Another activity for the foundation is securing resources for further restoration. The condition of Siberia – which was ravaged by a fire in the 1990s – continues to deteriorate, while of the stables and coach house, only the outer walls remain. Other structures requiring work include the chapel, the well dedicated to St. John of Nepomuk, and the granary.

Total investment for the project “Making the eastern part of the Mazowsze region more attractive to tourists through restoration of the historical palace and park complex in Korczew on the Bug River” is EUR 1 016 000 (PLN 4 444 070), with the EU’s European Regional Development Fund contributing EUR 593 000 (PLN 2 592 644) through the “Mazowieckie Voivodeship” Operational Programme for the 2014-2020 programming period. The investment falls under the priority “Environment and resource efficiency”.

Mazowieckie View programmes for this region