The reconstruction of an old fort in the Gradowa Mountain in central Gdansk, Poland, has turned a dangerous, no-go area into an educational and recreational venue for residents and tourists that now attracts over 62 000 visitors every year, thanks to the project: Reconstruction of old fortifications into the new Hevelianum Centre in Gdansk. 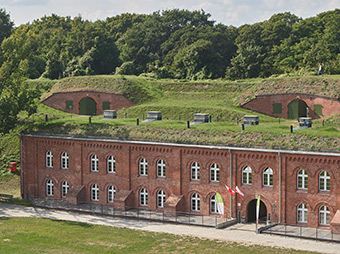 The Shelter Barracks at the Hevelianum Centre in Gdansk, Poland. ©Hevelanium

" Nothing happens by itself, automatically, with a snap of a finger. The revitalisation of the Hevelianum was a process. When, 21 years ago it was initiated as a Cultural Park, we did not anticipate where it would lead us. We knew that this plot should be returned to the city of Gdansk. We learned step by step. "

The project created permanent, interactive exhibitions located in various historic buildings at the site, and an educational laboratory for children. The development of the Hevelianum Centre led to the employment of around 40 people, seven of whom were hired as a direct result of the project.

The construction of the centre radically transformed the area around the fort. By 2007, it had become neglected and inaccessible to residents. The aim of the project was to reconstruct the structural elements of the former fortification. Educational and recreational elements were added, converting the space into an interactive learning centre.

Around 10 hectares of the former fortification and some 5 000 square metres of objects were restored. During the intensive restorative work, buildings that had formed part of the site were uncovered. These included shelters, laboratories, sentry buildings and military barracks. The main aim of the project was to combine the site’s historical aspects with education, which represents the future.

Having done this, the Hevelianum Centre became the first place in Europe where historic military buildings are being used to house a contemporary science centre. This merging of the old and new, tradition and modernity brings together young and older generations in a unique way.

All the educational spaces have an interactive learning component, which encourages the audience to actively participate in the experience. One of the main elements in the construction of the centre was a multi-media room.

The Hevelianum Centre is particularly popular among schools, who take advantage of the learning experiences on offer.

Total investment for the project “Reconstruction of old fortifications into the new Hewelianum Centre in Gdansk” is EUR 5 089 725, with the EU’s European Regional Development Fund contributing EUR 3 517 482 through the Programme 'Pomerania' Operational Programme for the 2014-2020 programming period. The investment falls under the priority “Democratic change” and “Jobs, growth and investment”.

Pomorskie View programmes for this region