This EU-funded project made it possible for the Bronisław Rutkowski Primary and Secondary Music School in Krakow to acquire 168 musical instruments. Used for both educational purposes and cultural activities, at the school and other venues, these benefit 7 170 people per year. 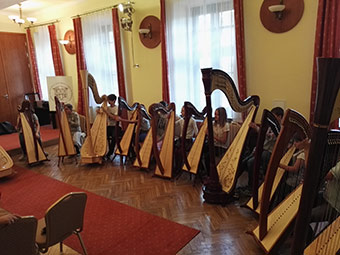 " Thanks to the project, the school is able to organise many concerts on various topics and in various forms. These are focused on children and other residents of the Podgórze district and the city of Krakow, with particular emphasis on the elderly and the disabled. The school actively cooperates with cultural and educational institutions, locally and internationally. We have an exceptionally wide educational offering and have become a well-known organiser and animator on Krakow’s musical scene. "

The project’s main aim was to safeguard and develop cultural heritage by increasing the school’s educational and cultural offering. The equipment purchased included four concert pianos, five electric pianos, keyboards, and instruments for early music education. Percussion and jazz instruments, as well as brass and woodwinds and some historic pieces were also part of the mix.

The project came in response to public demand for cultural and artistic education among young people and seniors.

Through the purchase of old instruments, such as from the Renaissance and Baroque period that were reconstructed on the basis of historical sources – as well as workshops and training in learning to play them – the project sought to help preserve cultural heritage for future generations. Currently, no other school in Poland has such pieces.

The project’s reach extended beyond the region, as shown by the school’s past activities. It continues to host a range of events, both nationally and internationally.

In April 2018, an international harp festival took place at the school that attracted world- famous musicians and presented various types of harps, both classical and jazz. Students were able to take master classes.

The Srebrna Szybka festival of contemporary children's and youth music was held at the school in March 2018. Its aim was to promote contemporary trends, composition and performance techniques among pupils and pedagogues of music schools at the first and second levels of teaching.

Another of the school’s projects is a series of concerts dedicated to great works of piano music, including performances by outstanding Polish and foreign pianists.

The school’s early music consultation centre holds workshops for teachers and music students interested in deepening their knowledge of, and skill in, playing instruments from past eras. Instruments purchased by the school for these workshops are: a harpsichord, Renaissance and Baroque lutes, a Baroque violin, a Baroque viola, a Baroque cello, a Baroque oboe, a natural trumpet, a traverso flute, and longitudinal flutes.

Finally, the school hosts a series of concerts for the elderly focused on well-known Polish vocal hits from the interwar period, as well as the 1950s and 1960s.This part of the project carries on the tradition of afternoon meetings (“five o'clocks”) and refers to the making of common popular music in the 19th and 20th centuries.

According to the school’s website, the aim is to awaken young people’s love of music. The school believes that supporting their talents is its privilege and duty. Care is taken to preserve children’s natural spontaneity and joy while learning an instrument, which is often hard work. The hope is that the music they explore and play becomes an inexhaustible source of satisfaction for them.

The school’s intention is to make the first years of music education memorable – a time devoted not only to acquiring knowledge and skills, but also the opening of doors to an unknown and wonderful reality.

The skills acquired at the school give rise to an everlasting sense of success and profound satisfaction. This is magnified when coupled with audience recognition or winning a competition. Learning music shapes young people’s characters by teaching them to deal with the stress and stage fright of public performances, and to work as a team, according to the website.

The school’s learning system is based on individual courses in a principal instrument and solo performance (or vocal courses in secondary education) and group courses in general music knowledge, group performance, choir, orchestra and big band.

In addition to individual lessons, students can attend orchestra classes (string orchestra, big band), chamber ensembles and choir. From an early age, they learn what it feels like to participate in both individual and group performances held in the school’s concert hall, and in historic venues like the Kraków Philharmonic concert hall, the Wieliczka Salt Mine, Kraków’s churches, and the Niepołomice Royal Castle, states the website. Students perform in festivals and competitions at home and abroad, for instance in Germany, Denmark, France, Italy, Czechia, Hungary, Slovakia, Lithuania and Ukraine.

Total investment for the project “Broadening the Cultural/Educational Offering by Equipping the Joint Primary and Secondary Music School in Kraków” is EUR 537 411 (PLN 2 318 726), with the EU’s European Regional Development Fund contributing EUR 455 830 (PLN 1 966 735) through the “Infrastructure and Environment” Operational Programme for the 2014-2020 programming period. The investment falls under the priority “Social inclusion”.

Małopolskie View programmes for this region