Eight regions in central Europe have come together to explore and exploit their rich industrial culture. The aim of the InduCult2.0 project is to make these regions better places to live and work and to provide a more attractive location for investors and tourists – by improving their identity and image. 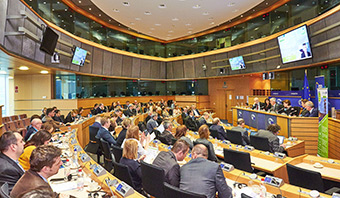 Eight regions in central Europe have come together to explore and exploit their rich industrial culture and make better places to work and live. ©InduCult2.0

" A progressive industrial culture fortifies the interlinks between society and industry: Overarching the regions’ past, present and future, it creates an authentic, dynamic identity for local people and improves image for people from outside. Apart from many other positive effects, we consider a developed industrial culture an underlying key factor in the upcoming industrial transition – shaping the societal base for smart specialisation. "

The project is improving links between museums, businesses, schools and the creative industries to generate cultural synergies. Through InduCult2.0, partner regions and stakeholders can exploit their industry-related cultural potential in a number of ways. The regions have joined forces in a transnational learning network to share knowledge and promote concepts and pilot actions. Initiatives developed within the project are adapted to specific regional contexts.

A wide range of pilot actions have been instigated, including the hosting of events, exhibitions and art shows which showcase industrial culture. For example, creative hubs have been established to help cities revitalise old industrial sites as exciting places to live and work. Local organisations, such as housing estates and councils, work together to provide visitors with the chance take ‘industrial camping’ holidays. In addition, industrial museum directors and company chief executives join forces to help school-going teenagers understand their regional culture – festivals like “days of industrial culture” have proved to be a successful format for that purpose in Austria, Italy and Germany.

The InduCult partnership works by defining actions and strategies locally and regionally through Focus Groups for Industrial Culture. Then scientific partners define common ground between the regions, which are developed into a transnational strategy to guide future activities. The project’s final step is to establish a central European Network of Industrial Culture, where the strategy can be nurtured to help the regions further exploit their specific cultural potential.

Total investment for the project “InduCult2.0 - Living Industrial Culture” is EUR 3 000 295, with the EU’s European Regional Development Fund contributing EUR 2 448 851 through the “Interreg Central Europe” Operational Programme for the 2014-2020 programming period. The investment falls under the priority “Cooperating on natural and cultural resources for sustainable growth in Central Europe”.