The Sámi parliaments in Sweden, Finland and Norway have come together through the Giellagáldu project to safeguard, promote and strengthen the use of Sámi, the region’s native languages. To achieve its goals, the project supported the development of the Nordic Resource Centre for Sámi languages. As a professional expert body, the centre’s task is to create new terminologies and standardisations for Sámi languages. It  advises on the use of names and offers consultation services to users of Sámi languages. 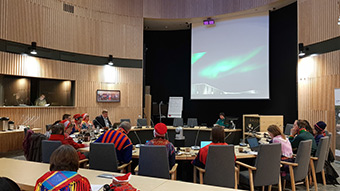 The Sámi parliaments in Sweden, Finland and Norway collaborated on the Giellagáldu project to establish the Nordic Resource Centre for Sámi languages ©Giellagáldu

The resource centre and the Sámi parliaments support the Sámi languages in a way that meets the individual needs, challenges and resources of each language group. The cross-border linguistic cooperation generated through this initiative reflects the fact that the Sámi people are not contained within one European country.

These language experts are responsible for delivering practical language work and dealing with issues that arise relating to the languages in which they work. The project delivered the first real-time consultation service dedicated to users of the various Sámi languages.

The Giellagáldu project has worked through a number of linguistic objectives, including the development of more than 4 000 new words and the creation of around 360 standardisations for South Sámi, Lule Sámi, North Sámi, Inari Sámi and Skolt Sámi. During the project the orthography for Ume Sámi was officially approved.

The project brought together the Giellatekno Centre for Saami language technology at the University of Tromsø and the Divvun group, which produces language-learning technologies for Sámi languages. They ensured that the standardisations and new terminology were incorporated into practical language tools like proofing systems, spell-check programs, web dictionaries and machine translation software. These resources are available at no cost to users.

Total investment for the project “Giellagáldu project” is EUR 1 846 199, with the EU’s European Regional Development Fund contributing EUR 922 439 through the “Interreg VA Nord” Operational Programme for the 2014-2020 programming period.