The Felles Fjellrev Nord project is stepping up efforts to save the endangered Arctic fox and boost its numbers in Scandinavia. To achieve this, a cross-border network of public authorities and research institutes from Norway, Sweden and Finland has been set up. 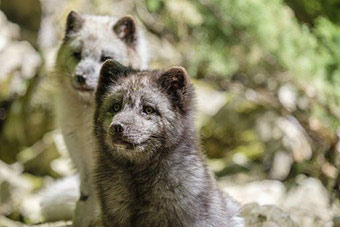 The Felles Fjellrev Nord project is working to save the endangered Arctic fox. ©CC0 Creative Commons

" We are very happy that we have been given the opportunity to carry out this project. It has been an important step in helping the arctic foxes in the northern parts of Norway, Finland and Sweden. "

Activities involve investigating the possibility of releasing Norwegian Arctic fox pups into the wild in Sweden’s Norrbotten county; collection of fox faeces for DNA analysis, culling of its competitor, the red fox; taking inventories of dens to support habitat analysis; and training volunteers to help with this task.
Some 40 automatic feeders have been placed in strategic locations and foxes have been tagged for the first time in Norrbotten county. Regular meetings are held between conservation managers and scientists to strengthen the network, and theme days and seminars are organised.

Information material is produced to raise awareness of the Arctic fox and its habitat: a children's book entitled ‘Meet the Arctic fox’ has been reprinted, and a brochure about the fox has been published in several languages, including Northern Sami.

The Arctic fox has become endangered in Scandinavia due to hunting and the presence of the red fox, a larger competitor which has moved north due to climate change.

Found across the northern hemisphere, the Arctic fox was once a common sight in mountainous parts of Scandinavia: numbers there are thought to have been as high as 15 000 in the 19th century.

In the 1870s, the fox’s fur began to increase in value, leading to large-scale hunting. By the time it was given protected status – 1928 in Sweden, 1930 in Norway and 1940 in Finland – it was already endangered throughout the region. Since then, there has been no sustained recovery and one 2008 report put the adult population in Scandinavia at just 120.

Felles Fjellrev Nord is part of the second stage of efforts to reverse this decline. The first Felles Fjellrev project ran during 2010-2014 and covered Trøndelag county in Norway and Jämtland county in Sweden. The results were encouraging and the outlook is starting to look brighter.

A main goal is to enable the fox to re-establish itself between the areas it now inhabits, to create a large contiguous zone with an Arctic fox population. The current fragmented distribution is a barrier to long-term survival. As wildlife does not recognise national boundaries, cross-border action is vital for achieving this, as are field support, coordinated research into future management and a regional management plan, all of which Felles Fjellrev Nord is doing.

The broader-based partnership in the second phase should bring financial benefits thanks to shared project management, purchase of equipment and transport of supplies. Focusing on a larger area facilitates evaluation and reporting.

The first indications are positive: two new litters were born in Norway in 2017 and two more followed in 2018; corresponding figures for Sweden were seven and 12, with the highest number of Arctic foxes for many years observed in northern Sweden in 2018.

Total investment for the project “Felles Fjellrev Nord” is EUR 998 872, with the EU’s European Regional Development Fund contributing EUR 582 236 through the “Interreg V-A - Sweden-Finland-Norway (Nord)” Operational Programme for the 2014-2020 programming period. The investment falls under the priority “Environment and resource efficiency”.

The Municipality of Żory