The city of Spoleto in Italy’s Umbria region is improving public lighting in its historic centre by installing some 1 000 warm white LED lamps and a remote control system for brightening, dimming, switching on and off and monitoring the functioning of each light. The project is part of Spoleto’s ‘Urban Agenda’, which entails the redesign of public services in order to tackle pollution and improve quality of life. It will make the city’s lighting more energy efficient – reducing consumption by around 40 % – and easier to maintain, as well as increasing security. 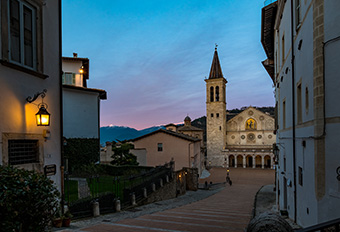 " The public lighting upgrades are part of a comprehensive framework of actions that Spoleto has been carrying out for some time in order to promote lifestyles and land management methods that cut pollution, protect the environment and improve quality of life. Prominent among them is the sizeable investment that has equipped the city with an integrated network of car parks and moving walkways which have significantly reduced traffic levels in the historic centre, thereby highlighting the quality of its architecture and monuments and making it more liveable. The work has received recognition in the form of the city’s certification under the Eco-Management and Audit Scheme. As only around 230 municipalities in Italy and five in Umbria hold this certification, it puts Spoleto among the elite in terms of environmental protection and sustainable development. "

Previously, Spoleto’s public lights contained various kinds of low-performance, high-environmental-impact lamps such as mercury vapour lamps. These were replaced by the LED lamps, while improvements were made to the electrical switchboards in the lights. Each lamp and switchboard is now fitted with a command and control device linking it to the remote control system.

Managed by an online supervisory unit, the system uses power-line communication, which needs no additional wiring and allows commands to be issued and digital data to be transferred in a flexible and dynamic way.

Use of the power-line method means that the system can also supply other smart services that provide added value for the city, such as video surveillance, Wi-Fi, charging of electric vehicles, variable message signs for traffic and measurement of air pollution.

The project covers the area within Spoleto’s medieval walls, as well as some adjacent streets, which equates to a network of about 17 km in length that comprises street lighting and lighting systems for monuments, historic buildings and sports facilities, among other features.

Main aims include cutting energy consumption, improving lighting quality while rationalising the system, enhancing monitoring so that maintenance can be performed in timely and cost-effective way and making safer the pedestrianised streets and streets used by motor vehicles. Other objectives are to provide the lighting network with the capacity to transfer digital data and to ensure that the new system does not detract from the aesthetics of the historic centre.
To achieve these aims, the municipal authorities launched a call for tender for the design, supply and installation of the new system. Enel Sole, part of the Enel group, was chosen to implement the project.

Similar projects carried out in other cities were analysed and experts from the sector were consulted, leading to the decision to install warm white LED lamps with a maximum colour temperature of 3 000 degrees Kelvin, which provide light of an appropriate level of brightness and keep the environmental impact low.

By achieving energy savings of some 0.25 gigawatts in total per year at full capacity, the new lighting system should help promote efficient use of resources, reduce pollution, protect the environment and support the transition to a low-carbon economy.

Further benefits come through the reduction of management and maintenance costs and resulting savings for the municipal budget thanks to the creation of a unified control system to replace the previous, fragmented set-up. Moreover, positive impacts have already been seen in terms of improved visibility and safety for both pedestrians and motorised traffic.