An EU-funded project has made adjustments to the Rio San Girolamo and Rio Masone Ollastu river basin in the municipality of Capoterra, part of the metropolitan city of Cagliari, capital of the Italian island of Sardinia. The aim was to reduce the risk of flooding and ensure the safety of local residents. The project included reshaping the final stretch of the river and transforming it from a small concrete channel to a wide, soil-based channel surrounded by vegetation. 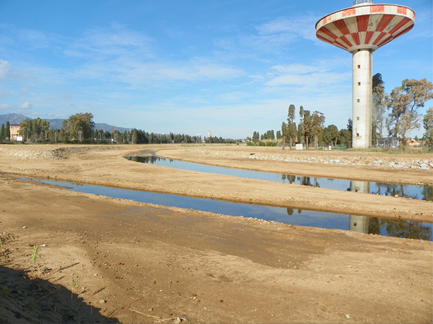 " The result that we are delivering to the people of Sardinia today shows that things really can change, that we must not give up in the face of difficulties and that with great commitment and determination it is possible to achieve things that had seemed completely impossible. This is the first lot of the works that have been awaited for 9 years. We have not wasted a day, and now, with the same focus, we will continue with the work on the next lots. "

As a result of the adjustments, the watercourse should be able to contain volumes of water similar to those that caused the October 2008 floods, which were the kind of exceptional event that, statistically, based on the available data prior to the event, has a recurrence interval of over 500 years.

Four people died in the floods of 22 October 2008. In the early hours of the morning, a violent storm hit Sardinia, spewing some 5 million m³ of water and debris including mud, rocks and tree trunks into the river. This flowed downstream, destroying homes, vehicles and other properties near the river, and public infrastructure such as roads and bridges. In all, the floods caused an estimated EUR 15 million in damage.

In Poggio dei Pini, about 370 mm of rain fell in approximately 3 hours, a rate similar to the peak rainfall levels of Hurricane Katrina in the USA in 2005. The streets were flooded and no communication was possible for several hours.

Although an event of such gravity has not occurred in the area since, in their hydrogeological assessment plan, the Sardinian regional authorities continue to categorise the Rio San Girolamo-Rio Masone Ollastu basin as being at very high risk of flooding.

A series of interventions

Work under the project was carried out following the performance of preliminary studies and assessment of the likely costs. It constitutes the first of five interventions to be implemented between the mouth of the Rio San Girolamo and the mountains near Capoterra for a total financial commitment of over EUR 50 million. The objective of this series of actions is to mitigate the risk of flooding in the coastal villages within the municipality of Capoterra and in and around Poggio dei Pini.

Subsequent interventions foresee the reconstruction of the crossings of state highway 195 over the Rio San Girolamo and the Rio Masone Ollastu, and adjustments to the river basin and rebuilding of infrastructure between these crossings and the mountains. Also, a new bridge is to be built over Poggio dei Pini lake, while work is to be done to secure the dams in the area and to connect the dam system to the river.

Total investment for the project “Hydraulic adjustment of the Rio San Girolamo-Masone Ollastu river and reconstruction of damaged public infrastructure in Poggio dei Pini and other settlements – from the mouth of the river upstream” is EUR 11 178 212, with the EU’s European Regional Development Fund contributing EUR 5 589 106 through the “Sardegna” Operational Programme for the 2014-2020 programming period. The investment falls under the priority “Environmental protection and risk prevention”.