Eumint: Support for refugee integration in the Italian-Austrian border area

Implemented in the autonomous provinces of Bolzano and Trento and the regions of Veneto and Friuli-Venezia Giulia in Italy, and the Austrian states of Carinthia and Tyrol, the Eumint project tackles social, economic, political and cultural challenges linked to integration of asylum seekers and refugees. It focuses on three aspects: cross-border cooperation between municipal, regional and Euro-regional institutions; civic integration; and labour market integration. 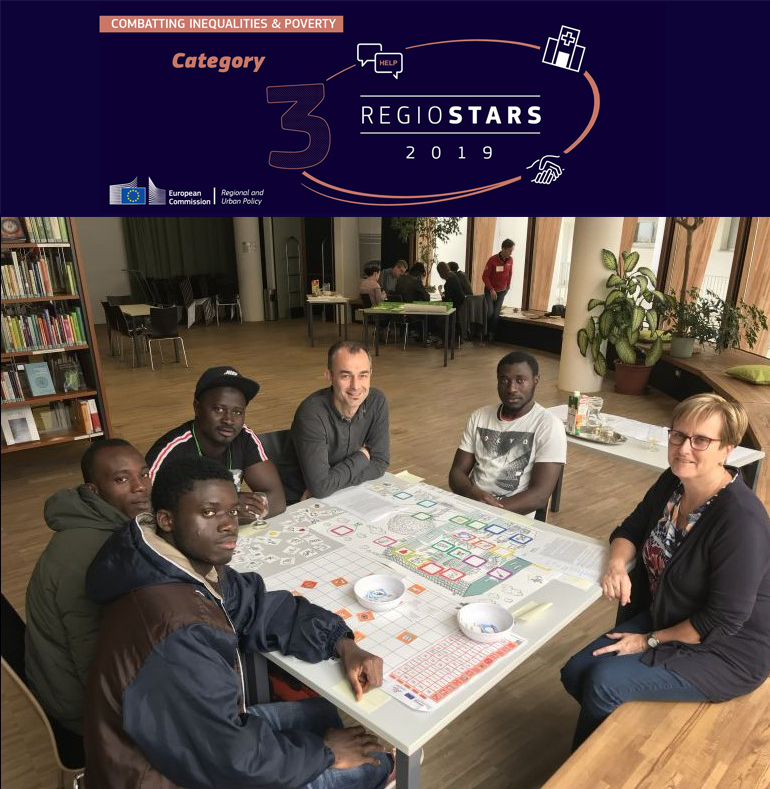 " The Eumint project is about the integration of asylum seekers and refugees. Relying on 44 stakeholder interviews and four cross-border visits to integration projects, we disseminate our results through an interactive forum of exchange to promote dialogue between various European countries. We will also provide a practice-oriented manual on the potential of cross-border cooperation in the field of integration. Moreover, we developed a board game ‘The House of Values’, which is composed of interactive teaching methods on common values. We carried out 80 encounters on common values with asylum seekers, refugees and the local population. A new competence check for the evaluation of practical, hard and soft skills and the online platform WippCare was created to improve the labour integration of asylum seekers and refugees. "

These activities facilitate network building, exchange of experience and identification of possibilities for collaboration. They will lead to the provision of recommendations for institutions working on integration and the development of new approaches to the issue. The results will be summarised in a handbook, which will be used as a basis for further exchange.

Eumint fosters civic integration through encounters between asylum seekers, refugees and local people that raise awareness of core common values and help participants understand each other better. To animate these encounters, it set up working groups of migration experts and social workers who developed and tested interactive teaching materials including videos, posters and a game called ‘The House of Values’. The materials are made available to schools and libraries and can be downloaded from the project website.

Seven sessions have been organised to train social care professionals to act as facilitators during the encounters. More are planned to reach a larger audience, produce a multiplier effect and permanently embed this kind of community dialogue into integration processes. Feedback on the encounters from the target groups and people working with asylum seekers and refugees is evaluated. The findings are used to refine future encounters and outputs.

To help asylum seekers and refugees find work, Eumint has created participatory tools within pilot initiatives which are formulated and implemented based on needs identified in different parts of the border area. In the autonomous province of Bolzano, a method has been developed for evaluating 100 refugees’ formal, informal and practical skills and drawing up detailed skills profiles for them. A total of 50 social workers and other professionals attended seven workshops to learn how to perform these evaluations.

Two Euro-regions –Tirolo-Alto Adige-Trentino and Senza Confini – exist to promote interregional cooperation along the Italian-Austrian border. However, recent migratory flows present big challenges for institutions in the area, leading to this cooperation being called into question.

At the same time, the border territories have considerable expertise in integration and many sociogeographic similarities, being characterised by strong urban-rural contrasts. Eumint builds on this to strengthen cross-border collaboration between a wide range of bodies and create tools and processes that involve local residents, refugees and asylum seekers in increasing social cohesion. In this way, it provides realistic, long-term approaches to integration.

“The beautiful thing about the Eumint board game ‘The House of Values’ is that it is not just a game, but a game to know better yourself.”

“The Eumint board game ´The House of Values` has inspired me to think more and more about my own values and those of other human beings and to do something about any injustices that I live or see.”

Total investment for the project “Eumint” is EUR 1 174 728, with the EU’s European Regional Development Fund contributing EUR 998 519 through the “Interreg V-A - Italy-Austria” Operational Programme for the 2014-2020 programming period. The investment falls under the priority “Social inclusion”.