An integrated approach to urban renewal in Aprilia, Lazio

The Urban Regeneration project implemented a number of public works addressing environmental issues, social inclusion and urban planning – all of which were aimed at improving the social cohesion of the 73 000 inhabitants of Aprilia, located in Italy’s Latina province. 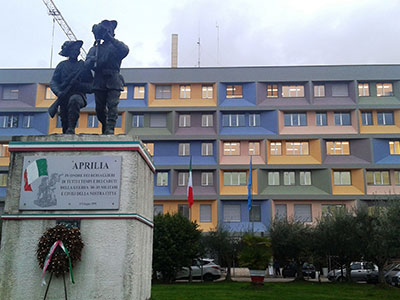 " This project has launched a new urban regeneration process, allowing us to implement innovative initiatives facing the various dimensions of urban life - environmental, economic and social – moving us towards becoming a more sustainable, competitive and inclusive city. "

The Urban Regeneration project set out to improve the day-to-day lives of Aprilia’s citizens by implementing a number of urban renewal works. As a result of the project’s urban plan for the future, the town now benefits from a new public nursery school, a cultural centre and a recreational bicycle path.

The project also carried out initiatives aimed at supporting the town’s underprivileged citizens. These included issuing 285 family care vouchers for families with children, the elderly and people with disabilities, and setting up 58 work experience opportunities for unemployed individuals.

All of these achievements were completed in just three and a half years – half the time that such public works projects typically take in Italy.

The refurbished public buildings include an abandoned factory that was converted into a community centre that now hosts a range of cultural events. A run-down municipal office building was given a modern update and refurbished with a geothermal and solar infrastructure.

To increase social inclusion, the project launched a voucher programme to support families in need. These vouchers can be redeemed by parents to purchase child care or by people with disabilities for home assistance services. In addition, various incentives were issued to support local companies in hiring and training new workers.

A range of Smart City applications were also tested and implemented. These include a smart environment monitoring system that provides updated information on atmospheric pollutants and greenhouse gases. Data is recorded via a number of CO2 measuring stations located throughout the city and returned in the form of graphical representations and maps. This allows city planners to study seasonal emission patterns and identify problem areas, such as traffic congestion.

The project has successfully given the city a new sense of life and purpose – one that combines the values of environmental sustainability with the need for social inclusion and cultural development. As a result of this uniquely integrated approach, everyone is benefiting from the project’s success.

Total investment for the project Urban “Regeneration project” is EUR 8 200 000, with the EU’s European Regional Development Fund contributing EUR 4 000 000 through the “Regional Research and Innovation” Operational Programme for the 2007-2013 programming period.

Lazio View programmes for this region