Turning the tide on marine litter in the Atlantic ocean

Across the Atlantic, marine litter is having a significant impact on the environment, health and safety – and at a socioeconomic level. Efforts to reduce marine litter demand regional collaboration. The EU-funded CleanAtlantic project is improving the capacity of Atlantic territories to monitor, prevent and remove litter. 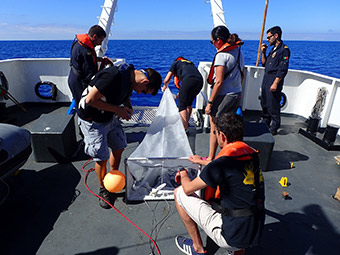 " Thanks to CleanAtlantic’s transnational approach, we are capitalising on and making available existing experience, data, and knowledge on marine litter. Our monitoring, modelling, and mapping capabilities will be significantly improved, as will the capacity to prevent and reduce marine litter with the involvement of key maritime stakeholders and local communities. Working together, we will turn the tide on marine litter and contribute to a healthier ocean. "

Marine litter is defined as any solid material, such as plastic, wood, glass, or rubber, that has been deliberately discarded or unintentionally lost on beaches or at sea. It includes material transported into the marine environment from land by rivers, drainage, sewerage systems, or winds. According to the OSPAR Commission, the amount of litter in many areas of the North-East Atlantic has reached unacceptable levels.

In-line with the EU’s Marine Strategy Framework Directive (MSFD), the commission is developing innovative ways to reduce marine litter, to the point where it no longer causes harm to the coastal and marine environment. However, as the Atlantic is bordered by a number of countries and territories, a coordinated effort is required.

Due to coastal and ocean circulation, marine litter is a transnational issue. That is why it is of paramount importance that territories work together to share knowledge, and resources and to commonly define and improve protocols, best practices, and tools. In fact, this need for transnational approaches is so important that it is at the heart of the MSFD, which requires consistency in marine litter assessment, monitoring, and national programme development.

Covering the entire Atlantic area, the CleanAtlantic project is building on the existing knowledge, resources, and capabilities of the partner regions. With an emphasis on contributing to ongoing regional plans, such as OSPAR, and national programmes, the project promotes collaboration among authorities, organisations, researchers, the maritime and fishing sectors, and volunteers. In doing so, it aims to create internationally useful monitoring, modelling, and mapping tools for reducing and removing marine litter.

The aim is that by the time the project ends in 2020, all existing knowledge on marine litter in the Atlantic area will be readily available to all in a centralised database – as an interactive map that shows available data on marine litter in a particular area, along with information on past and ongoing initiatives that address this environmental problem. In addition, the project is developing a CleanAtlantic Knowledge Tool. This online database will provide access to resources relevant to any topic related to marine litter that had been delivered by EU and national research projects and expert organisations.

Other key outcomes include:

The project is increasing public awareness about the impact of marine litter and how everyone can help prevent and reduce it.

Total investment for the project “CleanAtlantic: Tackling marine litter in the Atlantic Area” is EUR 3 249 241, with the EU’s European Regional Development Fund contributing EUR 2 436 930 through the “INTERREG Atlantic Area” Programme for the 2014-2020 programming period. The investment falls under the priority “Environment and resource efficiency”.