The Szeged Wildlife Park in the Great Plain Region of Hungary increased its visitor numbers by bringing Asian elephants to the zoo. A display section containing an elephant house was built, creating a comfortable environment for the animals and placing the zoo in a position to protect this endangered species. 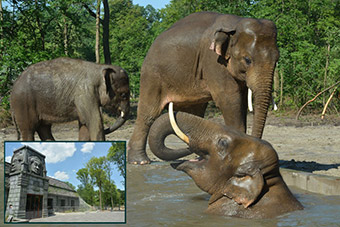 " Maintaining and increasing visitor revenue for all zoos is a challenge in the expanding market for tourism services. This can be achieved by increasing the zoo’s attractiveness and quality, and the value of the service. In addition, the main objective of the zoo is the protection of endangered species, in which the elephant is a flagship species. "

The park’s new elephant display was designed and built with conservation of the species in mind. The elephant house and a large runway were built to optimise the animals’ housing and to hold mixed breeding herds. The project successfully trained and has retained elephant specialists to handle the animals.

Electronic devices were bought to add interactive elements to the display, via a touchscreen information point, four laptops, a projector and screen, as well as a mobile grandstand with 51 seats. The park also used the project funding to buy an excavator machine and built a tapir house. Within one month of the Asian elephant exhibit opening, the zoo reached its peak in visitor numbers.

Elephants are intelligent animals that need special attention and to live in the right conditions to ensure their well-being. The elephant house has a 1-hectare runway system and five separate boxes, a winter showroom and a service facility. Since they are powerful and can be dangerous, the park ensured that safety was an important aspect in housing the animals. Special training was conducted for the professionals who handle the elephants.

The project was preceded by more than a year of preparatory work, which involved studying and visiting various elephant zoos. Hungarian professionals and the European Endangered Species Programme were involved in the planning.

The Szeged Wildlife Park is a popular tourist attraction in Szeged. It is a forest-lake nature conservation area that houses 190 animal species from five continents. There are many rare and endangered species in the park’s collection, but maintaining and increasing visitor revenues is a challenge, as it is for all zoos.

By bringing in Asian elephants, the zoo increased its attractiveness for visitors. The park has a peak capacity of 170 000 to 180 000 visitors a year; within a month of the elephant exhibit opening, the park reached its maximum threshold of visitors. Both domestic and foreign tourists visited the park and along with wide press coverage of the elephants’ arrival, the zoo increased its reputational reach.

The increase in tourism was an economic boost for the area, and the project’s construction was contracted to a local company based in the park. Four new jobs were also created within the zoo.

Total investment for the project “Wildlife Park of Szeged: Representing elephants and Asian animals” is EUR 1 547 888, with the EU’s European Regional Development Fund contributing EUR 1 547 888 through the Territorial and Settlement Development Operational Programme for the 2014-2020 programming period. The total investment falls under the priority “Environment and resource efficiency”.

Dél-Alföld View programmes for this region