Running from Baja in Hungary’s South Great Plain to Bezdan in Serbia's autonomous province of Vojvodina, the Baja-Bezdan Canal receives excess inland water to prevent flooding and supplies the navigable canal network with water from the River Danube to allow goods transport. It is also used for sports and recreation. To reduce flood risk, the BABECA project is restoring the canal’s structures and capacity, and improving cross-border water management and risk prevention systems. 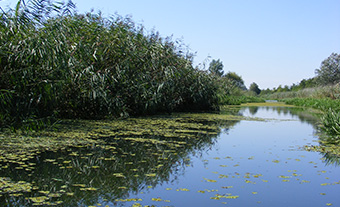 " “The main goal of the project is to ensure the long-term and sustainable functioning of the canal, which is jointly managed from the Serbian and Hungarian sides, and to strengthen flood defences in the protected area alongside the canal.” "

In Hungary, BABECA is planning to build boat ramps and driftwood removal platforms at three locations and dredge a 5 600 m section of the canal. In Serbia, the Bezdan and Šebešfok locks – which connect the Baja-Bezdan and Vrbas-Bezdan canals – are being renovated and restored.

Special equipment has been procured for maintenance of the canal on both sides of the border, and the performance of studies and drawing up of plans should ensure the project provides a basis for further developments.

Dredging and upgrades to locks

Totalling 44.8 km in length – of which 32.2 km is in Hungary, 10.6 km in Serbia and 2 km forms the border between the two countries – the Baja-Bezdan Canal was built during 1870-75. In recent years, its water supply capacity has decreased significantly due to a lack of maintenance. In addition, the water status has been assessed as 'poor' on account of mud-related problems and the canal bed becoming overgrown, particularly near the villages of Bátmonostor and Nagybaracska in Hungary, making dredging necessary.

Built in 1856 with two pairs of winged gates at each end of the chamber, the Bezdan lock was the first facility of its kind in Europe for which concrete was laid underwater. Due to the condition of its structure and machinery, it has not been used as a lock since 1995. It nonetheless plays an essential flood-defence role in the Danube-Tisza-Danube hydro-system, of which the Baja-Bezdan and Vrbas-Bezdan canals form part.

The Šebešfok lock was built in 1875. It has two pairs of double-winged gates and a trapezoidal canal profile. The chamber between the top and bottom gates was never completed, so navigation was only possible when water levels on the Baja-Bezdan Canal were high. Previously a key installation for goods transport, since the development of the Danube-Tisza-Danube hydro-system in the post-war period, the lock has served as a safety sluice. Openings on each side of the bottom gates allow for regulation of water flows from the canal.

Work carried out under BABECA will improve quality of life in the area in several ways. Some 110 000 people will benefit from the flood protection measures, while elimination of bottlenecks in the canal network will ease movement of people and goods between and within Hungary and Serbia, as well as between Serbia and other countries, given the Bezdan lock’s position as the first lock on the Danube in Serbia. This will support cross-border cooperation, construction of vessels at the Bezdan shipyard, and tourism.

The project will improve the quality of water in the Baja-Bezdan Canal, thereby increasing the potential for further measures to bolster the canal’s capacity to support aquatic ecosystems.

Total investment for the project “BABECA: The complex water management development of the area of the Baja-Bezdan Canal” is EUR 8 699 537, with the EU’s Instrument for Pre-Accession Assistance contributing EUR 7 394 607 through the “CBC Hungary – Serbia” Operational Programme for the 2014-2020 programming period. The investment falls under the priority “Improving cross-border water management and risk prevention systems”.