Reducing the impact of disasters on South-West Indian Ocean populations

This project aims to reduce the impact of natural and health disasters, as well as the foreseeable effects of climate change on south-west Indian Ocean populations. The partner countries are Mauritius, the Comoros, the Seychelles, Madagascar, Tanzania, Kenya, Mozambique, Réunion and Mayotte. 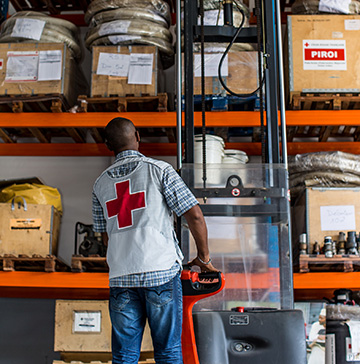 Management of disaster preparedness supplies in the Comoros. ©PIROI

" Through this project, we are working to reduce the impact of both natural and health disasters in the Indian Ocean zone. As part of this effort, combating the harmful effects of climate change is a priority. "

The Indian Ocean Regional Intervention Platform (PIROI) is a French Red Cross tool for the management of natural and health risks and disasters. Its activities are integrated into the disaster management cycle. They include reduction of disaster risk, preparation for disasters, response to emergencies and post-emergency rehabilitation.

The PIROI’s actions to reduce the impact of natural and health disasters and the effects of climate change on populations in the zone serve four strategic objectives:

Work to raise populations’ awareness about natural disaster risks involves setting up risk reduction projects, such as the Paré pas Paré projects in Réunion, Zeness pran Kont in Mauritius, or Azir ozordi, prepar pour demen in the Seychelles. In each case, the project methodology used is adapted to the particularities of the local context but is based on a shared method:

Concerning preparation for disasters, the PIROI wants to improve the local response, by developing contingency plans and early warning systems, and by strengthening intervention teams and national societies, through training, provision of operational equipment and advance placement of emergency equipment. National organisations such as national risk management agencies can also benefit from capacity boosting.

From 2015 to 2017, the project helped educate 39 511 people about natural and health disaster risks, and organised 39 training sessions on risk management benefiting 897 people.

Total investment for the project ‘Management of Natural and Health Disasters in the South-West Indian Ocean zone’ is EUR 4 992 024; the European Regional Development Fund contribution is EUR 4 243 220 through the ‘Indian Ocean Area’ cooperation programme for the 2014-2020 programming period. The investment falls under the priority ‘Strengthening collective capacities for adaptation to climate change, and for risk prevention and management’.