Protection and sustainable development of the Sète lido in Marseillan, France

In France, the Sète lido in Marseillan, located in the Occitanie region, is a stretch of sand by the Mediterranean. It is over 12 km long and is a key natural space between the sea and the lagoon. In the face of coastal erosion and loss of the shoreline, an important protection and development project has allowed measures to be taken both on land and at sea, to safeguard this space. 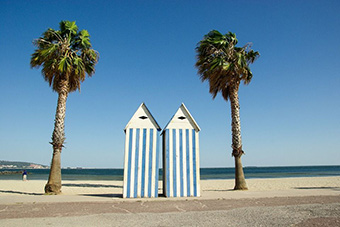 " Protecting the Sète Lido was essential for the preservation of the Thau lagoon's ecosystem and the region’s economic and tourism activities. The work was focused in particular on the installation of a swell attenuator over a distance of 2.4 km, the reconstruction of the dune ridge and the creation of a cycle path and parking areas. "

The Sète area has a large seaboard with over 20 km of coastline, including that of the Sète lido in Marseillan. Sandy lidos are exceptionally beautiful landscapes, forming rare dune ecosystems with great biodiversity, including flora and fauna only found in coastal spaces.

However, these sandy formations are fragile and are being damaged by significant natural erosion, accelerated by human activity. Thanks to this project, it has been possible to reconstruct the dune ridge and beach along a 12 km stretch, to protect the lidos, which are a major environmental and economic asset.

Developments on land and at sea

The redevelopment of the coastal strip has involved moving existing infrastructures (such as the road) and creating others (such as parking areas, dune ridge crossing points, sanitary facilities and a cycle path). Thanks to the redevelopment, the beach has been expanded, natural spaces enhanced, and the coastal road maintained. It has also encouraged economic activities such as tourism, viticulture and shellfish farming.

At the Sète lido in Marseillan, which is the part most exposed to erosion, there are complementary measures at sea and on land.

Firstly, drains buried under the beach in the surf zone were used to naturally collect the water and channel it towards a pumping station that pumped it back to sea. The drainage was designed to dry out the sand in the surf zone, so that it would remain on the beach, rather than being carried out to sea by the waves.

Secondly, a swell attenuator in the form of a geotextile tube was installed, to reduce the impact of wave surges on the coast, by causing the waves to break offshore. This swell attenuator also had a massive replenishing effect with 350 000 m3 of sand deposited on the beach and in the shallows, to restore sufficient beach width and withstand powerful waves.

Preserving several functions of the site

The rehabilitation programme for the Sète lido in Marseillan sought to maintain viable operating conditions for economic activities, as well as more traditional activities like fishing. To protect hundreds of jobs connected to tourism or viticulture, it was necessary to preserve the Thau lagoon, which was at risk of invasion by the sea. In total, 550 shellfish farms work in direct connection with the lagoon, which alone provides 80% of the French production of Mediterranean oysters and mussels. In total, 2 000 direct jobs depend on the lagoon. Its disappearance would cost the community tens of millions of euros, not to mention the loss of the lido vineyard and the Listel bottling unit. The loss would be just as terrible for all the tourism professionals in the area of the Thau Basin and beyond. Preserving the lido, a stretch of sand between the sea and the lagoon, also protects a natural biotope measuring almost 12 km in length.

Total investment for the project ‘Protection and sustainable development of the Sète lido in Marseillan’ is EUR 52 700 000; the European Regional Development Fund contribution is EUR 18 000 000 through three ERDF ESF operational programmes for Languedoc-Roussillon: 2000-2006, 2007-2013 and 2014-2020. The investment falls under the priority of ‘Improving risk prevention (floods and coastal risks) and promoting biodiversity’.

Languedoc-Roussillon View programmes for this region