Centre-Val de Loire: an ecological restoration to restore the image of a neighbourhood

While the "La Prairie Grand Espère" condominium suffered from a tarnished image, its restoration, under conditions that respect the environment and benefit everyone economically, should be a guide to other priority districts in the French Centre-Val de Loire region. 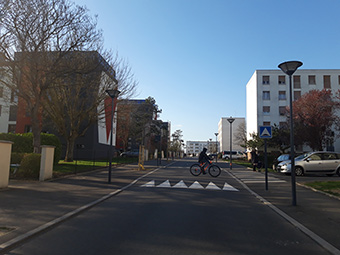 " Prairie Grand Espère was facing several structural challenges such as aging condominiums and impoverished residents. The chosen renovation project combines ecological and social commitment. Residents will benefit from a drop in expenses, thanks in particular to new building insulation and the installation of geothermal heating. "

Launched at the end of 2017, the project to restore the "La Prairie Grand Espère" condominium in Saint-Jean-de-la-Ruelle is aimed at carrying out energy efficiency work that will result in energy savings and thereby reduce costs for its residents. Located in a priority district in the Centre-Val de Loire region, the co-ownership and the work carried out at the site should serve as an example, particularly in terms of promoting geothermal energy and changing the image of certain districts. The project is also a stimulus for the local economy because of its scale.

La Prairie Grand Espère has 17 buildings dating from 1961, some 300 dwellings, a caretaker's lodge and 5 shops. A difficult economic and social context is at the origin of the project: excessively high charges, a worrying amount of unpaid debts, a deteriorated and ageing heritage, and complex solvency of the co-owners.

Within this framework, the restoration project aims, in addition to reducing costs, at enhaningc the value of the condominium's assets. The chosen ecological solutions must also incorporate sense into building insulation techniques and allow the training of the inhabitants on eco-gestures. It is also an opportunity to bring the buildings up to safety standards.

Replacing gas heating with a geothermal system is also a first in the region—at least on this scale—in addition to offering an ecological solution for condominiums. Indeed, this energy does not emit any greenhouse gases and its raw material, the earth's heat, is totally free.

To meet the challenges posed by the worksite, the French State and the European Union contributed 70% of the funding for the works, to which the European contribution was added. A system of pre-financing has been set up to advance the subsidies and avoid co-owners having to advance them.
The project is of particular benefit to the region since some 20 jobs have been created and local firms have been selected to carry out the work. The choice of ecologically restoring the condominium benefits the greatest number of people. Ultimately, 265 households are expected to be able to enjoy better energy consumption and the estimated annual reduction in greenhouse gas emissions is 862 tonnes of equivalent C02.

Total investment for the “Energy renovation of the La Prairie Grand Espère condominium building” project is EUR 12 025 442; the contribution of the European Regional Development Fund amounts to EUR 798 000 under the “Operational Programme for the Centre-Val de Loire Region” cooperation programme for the 2014-2020 programming period. The investment falls under the priority of “Low-carbon economy”.