As part of its effort to encourage citizens to use trains, bicycles, and electric buses, Třinec, a city in the Czech Republic, built a state-of-the-art, automatic parking tower for bicycles. 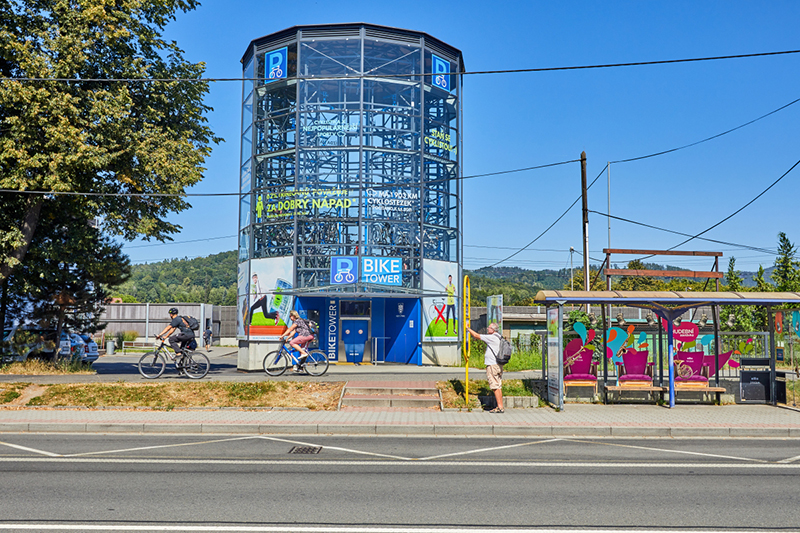 " The construction of the bicycle tower was one of the steps taken to support the development of bicycle transport and improve public space in the city centre. Thanks to the Integrated Regional Operational Programme, small and medium-sized towns such as Třinec can afford this financially demanding solution. With this measure, the number of bicycles parked in a given locality is multiplied. Thanks to the cooperation with the train carrier, we know that many of the cyclists using the cycle tower continue their journey by train. "

Třinec is on a mission to become a smart city, with a strategy announced in 2016. It aims to become more environmentally friendly by motivating its citizens to use trains, bicycles, and electric buses instead of cars.

As part of its strategy, this EU-funded project helped construct a parking tower for bicycles. The high-tech, automated system can park up to 118 bicycles and is next to the city’s busy transport terminal.

The Třinec smart city strategy is built around three pillars: smart administration, clean and active transport, and the environment. Each pillar is broken down into sub-pillars. Transport is focused on developing clean public transport and encouraging use of bicycles and electric vehicles, and connecting the two.

At the heart of this effort is the construction of a new railway near the city’s main square. Not only does the new terminal provide residents with modern amenities, it also serves as the hub for the city’s smart transportation system. By relocating the station to the city centre, people are more likely to walk, bike, and take a bus to and from the station.

With the new terminal built, city administrators next turned to creating the conditions to encourage people to use their bikes – not only for recreational use, but also for their daily commuting to work, shopping, or school. During this phase, bicycle lanes were added to roads, as were bicycle stands, pumps, and service stations. The city also installed charging stations for e-bikes.

Although all this infrastructure is essential, the star attraction of this phase is the bicycle parking tower.

The tower is state-of-the-art and high-tech. When the cyclist arrives, they bring their bike to the door and insert it per the instructions. With just a press of a button, the bike is automatically loaded into the tower and the cyclist is given a receipt. To retrieve the bike, one simply scans the receipt and the system automatically gets the bike and delivers it back to the owner.

Thanks to initiatives like this, Třinec is seeing a significant decrease in traffic and, with it, a substantial decrease in pollution.

Total investment for the project “Parking house for bikes Třinec” is EUR 414 600, with the EU’s European Regional Development Fund contributing EUR 352 410 through the “Integrated Regional Operational Programme” for the 2014-2020 programming period. The investment falls under the priority “Jobs, Growth and Investment”.

Moravskoslezsko View programmes for this region