An EU-funded project promoted the heritage of the Bulgarian-Serbian cross-border region through cultural activities, including theatre plays and displays of traditional dancing, with the aim of boosting regional integration and increasing tourism attractiveness of the area. The activities were focused on the municipalities of Montana, in Bulgaria and Medijana, in Nis, Serbia. 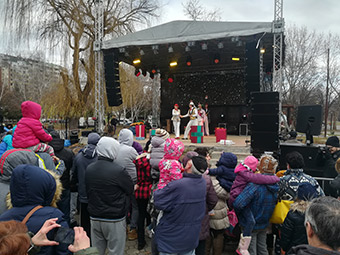 " The project elaborated a ‘common tourism promotion strategy’, based on research conducted in both regions, which will allow the local governments and tourism stakeholders to further develop the sector. "

The partners on the project were City municipality Mediana, the City of Nis as a lead partner and the municipal drama theatre Dragomir Asenov – Montana. The project partners organised four cultural events, two in Bulgaria and two in Serbia, featuring performers from both countries. The audience enjoyed traditional dances and songs that reflected the countries’ common cultural heritage, as well as plays, puppet theatres and modern dance ensembles.

An online cultural calendar was created to inform locals and tourists about events in the area and a common tourism promotion strategy was developed. The result was improved regional cohesion, thousands of people following the project on social media, and a boost to local tourism and economic activity.

The project was based on data from the Bulgarian Census Bureau and Serbian tourism officials, showing that tourism in the area lagged behind international trends.

The aim was to popularise local cultural events and create awareness of the attractiveness of the cross-border region as tourism destination and to improve cohesion between the two nations and their shared cultural heritage – reflected in songs, dance, stories and lifestyle.

The result was an online campaign called “Mediana Timeless”. The performances were free and held in public spaces. As a result, residents and tourists, but also people from marginalised groups and those with disabilities were able to enjoy the shows. The performances were filmed and posted on YouTube and promoted on Facebook, Twitter and Instagram.

The main benefits were more than 13 000 followers of the project on the three social networks, more than 25 000 page visits and 9 000 interactions with visitors. More than 1 000 local citizens, pre-school and school children attended the events and enjoyed performances by Bulgarian and Serbian musicians and actors.

What was innovative about the project was that when one partner organised an event on its territory, the performance was streamed online, allowing the other partner to organise a public viewing for its citizens and tourists.

An outdoor stage and projection system for the Bulgarian partner and stage equipment, audio, sound and projection systems for the Serbian partner were purchased. The partners aim to continue using the equipment for at least five years after the end of the project. Both partners are ensuring the sustainability of the project by budgeting for it and financing it with their own and other sources of funding.

The common tourism promotion strategy was intended as guide for tourist agencies and organisations. It outlines trends in local tourism and makes recommendations for future plans. It contains information about traditional cultural events and historical and tourist sites.

The common online cultural calendar was elaborated to inform tourists and local residents about upcoming events and attractions, helping tourists plan their visits to the region.

The project provided a boost for companies in the tourism sector, including transport operators, gift and souvenir shops.

Total investment for the project “Improvement of Intangible Cultural Heritage BG-RS” is EUR 527 627, with the EU’s Instrument for Pre-Accession Assistance Fund contributing EUR 486 783 through the “Interreg-IPA CBC Bulgaria-Serbia Programme” Operational Programme for the 2014-2020 programming period. The investment falls under the priority “Encouraging tourism and cultural and natural heritage”.

Severozapaden View programmes for this region