Bringing the Danube region’s hidden histories and culture to life

Hidden Heritage, forgotten histories and cultural landmarks are being exposed to a new audience through a project that spanned six countries in the Danube region. The Danube Culture Platform – Creative Space for the 21st Century project revealed spaces, buildings and even personalities whose influence and importance may have slipped from memory. The goal was to integrate these cultural assets into new or existing cultural routes to encourage more tourists to visit the region. 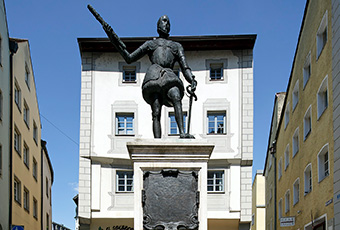 The ‘Nipple of the City’ by Romanian artist Dumitru Oboroc – an installation in Regensburg, Germany, and a cultural attraction logged by the Danube Culture Platform ©City of Regensburg, Photo: Stefan Effenhauser

" The aim of the Danube Culture Platform project is to highlight cultural heritage and find new forms of interpretation for an audience of the 21st century. This is only possible through transnational cooperation with a network of great partners from the Danube region. "

The Danube Culture Platform worked with the European Institute of Cultural Routes to discover, or rediscover, places of interest and develop new destinations for visitors, literally putting more of the region’s past on the (tourist) map. Such places include archaeological sites, destroyed cultural heritage, villages flooded to make way for reservoirs and community histories driven underground for political or social reasons. The detective work paved the way to showcase historic places and events in contemporary ways, possibly using the latest interpretive technologies – such as apps and virtual reality displays.

One of the project’s results was a Guidebook on Resourcing Hidden Heritage for Tourism. It reveals how to recognise hidden cultural heritage and helps stakeholders such as museums and local authorities evaluate a cultural asset as a potential tourism resource. There is advice on the use of tools for interpretation and how best to link new places of interest to existing cultural routes in the Danube and wider Europe.

The project team produced an extensive list of hidden heritage across various categories and themes: from shipping in the Danube and local industrial architecture to lost recreational spaces and military structures. In addition, the list covers migrations and expulsions of communities. Individuals who lived and worked in the region – such as Albert Einstein and composer Joseph Haydn – are included in the comprehensive piece of research.

Within the framework of the project, partners formulated 15 transnational themes that could be used for the creation or broadening of cultural touristic routes. These 15 themes connect 135 hidden heritage spots that the partners found, researched and, for some of them, implemented pilot projects on. The discovered spots contain tangible and intangible heritage which had been hidden, destroyed, driven underground, rendered inaccessible, or forgotten.

The list of hidden heritage spots, organised by themes and by countries, is available on the project website and being used by those working in the tourism and cultural sector to enhance understanding of the Danube region’s history and culture. This information, together with pilot project results, will help extend existing tourist routes.

Total investment for the project “Danube Culture Platform – Creative Space for the 21st Century” is EUR 1 676 878, with the EU’s European Regional Development Fund and Instrument for Pre-Accession Assistance II contributing EUR 1 425 346 through the “Danube Transnational” Programme for the 2014-2020 programming period. The investment falls under the priority “Environment and culture responsible Danube region”.