An anchor point in Brussels for Zinneke, a socio-artistic organisation

The non-profit organisation (asbl) Zinneke has acquired and renovated a building in Place Masui, in Brussels’ north district. The aim was to find a permanent anchor point for this organisation, which is responsible for organising the Zinneke Parade every two years. The choice of district was mainly driven by the lack of a socio-artistic dynamic or cultural infrastructure in the area. 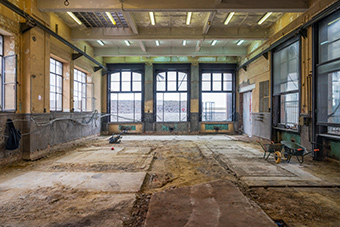 The non-profit organisation Zinneke is located in the former Atelier General du Timbre, in the Masui area of Brussels. ©Zinneke asbl, Delphine Mathy 2019

" The ERDF Masui project is opening a new chapter for non-profit organisation Zinneke. It gives the association a permanent anchor point to act as a ‘third place’, in other words, a venue for sharing spaces, tools, equipment, knowledge and skills with other people and projects. "

Zinneke organised the first Zinneke Parade within the framework of the Brussels 2000 European City of Culture. This event has been organised as a way of using a big party to build bridges between the city’s 18 communes and city centre and engage all sociocultural organisations. The idea is to showcase the multicultural richness of the different neighbourhoods and break down barriers within the region.

Zinneke, which is a non-profit entity, can be defined as an organisation responsible for the general coordination of socio-artistic work across the entire Brussels-Capital Region. For each Zinneke Parade, it establishes artistic and social dynamics between residents, associations, schools, local figures of all kinds and artists from various neighbourhoods in Brussels and beyond.

Investment in a location and development of infrastructure

Since the Zinneke Parade first started as part of the Brussels 2000 European City of Culture, Zinneke has had no fixed base and has moved every year.

Zinneke moved into the Masui area in 2013. Thanks to support from the Brussels Capital Region, which bought the former site of the Atelier Général du Timbre (General Stamp Workshop), the organisation was then able to work on a more long-term vision. Then, the following year, in 2014, Zinneke submitted a case as part of European Regional Development Fund call for projects, launched by the Brussels Capital Region and Europe, requesting financial support to renovate the new site.

Zinneke intends to turn this 2,800 m2 site into a permanent location for meetings, creativity, training and production that is adapted to the needs of the Zinneke project, and, on a wider scale, to those of the city and its various neighbourhoods. This production centre and its many potential uses, is nothing but a huge laboratory, an incubator for socio-artistic initiatives, and it is central to the collaborations Zinneke develops with and between residents, associations, artists and other social, cultural, economic and environmental actors in Brussels and beyond.

The project is also intended to be a large-scale pilot project for the development of infrastructure based on the reuse of building materials, with maximum respect for existing structures. Ultimately, where possible, the work will be carried out by people who have been trained in the multifaceted trajectories of artisan reconstruction work.

Teams involved in renovating the building

The ERDF-Brussels Capital Region funds mainly cover investment expenditure in renovation, development and fitting out the building, as well as operational costs associated with the project (payment for staff, coordination, studies, management and communication).

On an operational level, following an architectural tender, Zinneke appointed a team of architects in July 2016. Zinneke and its partner Rotor developed a co-design work methodology in collaboration with a certain number of Brussels-based cultural and artistic actors in order to establish an overall programmatic and architectural proposal. The project is currently under construction and in the phase of reconstruction, acquiring permits and re-usable supplies. The Zinneke teams in training will be involved in the renovation and development process and the building will remain in use by the Zinneke team throughout the construction process. The work is scheduled to be completed by late 2021.

Total investment for the project ‘Masui4ever-Zinneke Parade’ is EUR 4 235 705; the Cohesion Fund contribution is EUR 2 102 461 through the ‘ERDF PO Brussels Capital Region/EFRO OP Brussel Hoofdstedelijk Gewest’ cooperation programme for the 2014-2020 programming period. The investment falls under the ‘Promoting social inclusion, combating poverty and any discrimination’ priority.