A project in the Austrian region of Oberösterreich is developing technology that could reduce traffic jams while making driving greener and safer. The Connected Vehicles project has designed algorithms and testing environments for computer programs that help drivers use roads more efficiently and allow vehicles to better interact with other vehicles and their surroundings. The technology could help to cut down pollution from driving, make commercial and public transport more profitable, improve road safety, and reduce the need for new transport infrastructure. 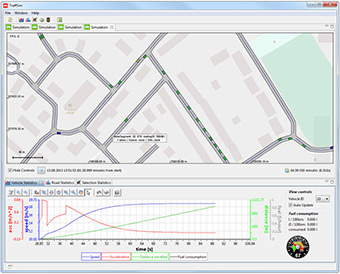 " We want to reduce the environmental impact of driving, use existing street networks more efficiently, help drivers use less fuel and reduce traffic jams. EU funding is a great help in enabling us to carry out this project. "

Among other results, Connected Vehicles has designed a driver re-routing system that can cope with coverage limitations, extended a testing environment so that it can test how entire communications links might behave in traffic, and developed methods to minimise instruction delays while keeping systems secure.

Connected Vehicles’ researchers have developed a number of technologies that can contribute to better-flowing, safer, less polluting roads.

One example is a predictive re-routing navigation system that could prevent or limit traffic jams. It suggests alternative roads for selected vehicles if congestion is likely to arise in the near future. A simulation showed that nudging drivers into the optimum route with this programme could give big reductions in journey times, fuel consumption and CO2 emissions. When only two thirds of the cars in the simulation used the program, up to nine-tenths of the savings were still possible.

Other innovations improved simulation environments for V2X systems development. In one, researchers extended an existing simulator, Linzframe, to the whole communications link – transmitter, channel and receiver. This can help researchers and designers to better identify real-life network parameters such as available data rates or latencies. Another change simulates more accurate data transmission over narrow bandwidths, used for fast communications.

In terms of safety, the project has looked at how to ensure data security – to prevent hacking – without slowing down safety-critical messages. The project has also developed a simulation of a system that double-checks encrypted braking instructions by looking for braking lights in the car in front.

Work continues on these developments and others, such as how to optimise departure times to reduce congestion. Results have been shared in journals and conferences. Seven jobs have been created directly under the project, while one PhD student in the project now uses his knowledge in a commercial company.

Total investment for the project “Connected Vehicles” is EUR 793 900, with the EU’s European Regional Development Fund contributing EUR 635 120 through the “Investments in Growth and Employment Austria 2014-2020” Operational Programme for the 2014-2020 programming period. The investment falls under the priorities “Research and innovation” and “Low-carbon economy”.

Oberösterreich
View programmes for this region

Department for Mobility and Energy