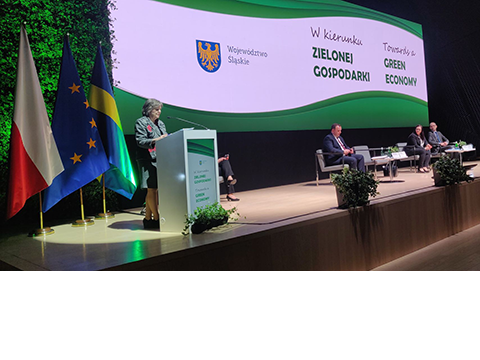 To present the Just Transition Fund and its role in supporting sustainable transition, European Commissioner for Cohesion and Reforms Elisa Ferreira visited today the Polish region of Silesia - the biggest coal-mining area in the European Union with a population of 4.5 million people. Like other European coal regions, Silesia has to transform itself and diversify into a sustainable economy. For Silesia and Poland the European Green Deal and the Just Transition Mechanism is an opportunity to move to a sustainable, innovative and carbon-neutral economy. It will also improve the health of the Polish population.

“The Just Transition Mechanism is more than a financial proposal. It is a political recognition of the social and economic impacts of the transition. And it is Europe’s commitment to support the people and regions most affected by the transition.” said Commissioner Ferreira during the Conference ‘Just Transition Fund kick-off for Poland’. “With the Just Transition Fund we will ensure that Poland benefits to the full, and that no region in Poland is left behind. We will rebuild, reskill and diversify the regions most dependent on fossil fuels. So that Europe – and Poland – are at the forefront of the new industrial revolution.”

During the conference ‘Towards a Green Economy’, devoted to the exchange of experiences of transition of coal dependent regions in Europe, Commissioner Ferreira expressed the commitment to assist coal regions in transition and underlined the benefits of cooperation and exchange of good practice among regions and Member States via the Platform on Coal Regions in Transition.

Towards the transformation of Silesia

The visit in Poland was also the opportunity to visit Silesia’s flagship transformation projects such as the Silesian Urban Park and Silesian Museum, and to see the challenges faced by the city of Bytom which suffers from geological damage from underground coal mining.

Today’s events have taken place in the centre area of Katowice, which until 2006 was dominated by a coal mine. In a period of 10 years, thanks to the European Regional Development Fund (ERDF), the city was transformed. Three flagship investments: the Museum of Silesia, the Polish National Radio Symphony Orchestra and the Congress Centre in Katowice received major support of EUR 123 million from the ERDF. The social and cultural transformation of Katowice made the place much more attractive for inhabitants, tourists and businesses.

Poland relies on coal and lignite for about 80% of its electricity production. In Silesia, coal is extracted in 18 mines and employs around 78 000 people in the coal sector.

Due to high emissions, Poland suffers from the highest air pollution in Europe and over 40 000 people are estimated to die prematurely every year as a result.

On 11 December 2019, the Commission presented the European Green Deal, with the ambition of becoming the first climate-neutral continent in the world by 2050. On 14 January the European Commission proposed a Just Transition Mechanism to bring better and healthier jobs, cleaner and less polluted cities for European Union’s citizens. One of the pillars of this Mechanism is the Just Transition Fund. It will enter into force on 1 January 2021 and will provide the resources to fund the projects and initiatives that will reduce the impact of their transition towards climate neutrality.