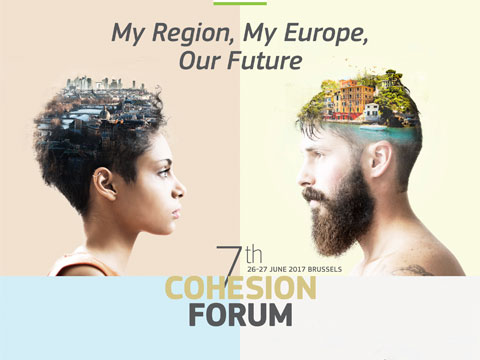 The Seventh Cohesion Forum, which will take place on 26-27 June 2017 in Brussels, is a large scale political event held every three years, bringing together more than 700 people including high level representatives from European institutions, central governments, regional and local representatives, economic and social partners, NGOs and academics. Keynote speeches will be delivered by the President of the European Commission, Jean-Claude Juncker, the President of the European Parliament, Antonio Tajani, and the Prime Minister of Malta, Joseph Muscat. The event will include a number of additional keynote speeches, three panel debates and three parallel workshops on critical issues regarding the future of Europe and the future of the European Structural and Investment Funds

The event will be a milestone in the preparations for the post-2020 framework for the European Structural and Investment Funds. Cohesion policy needs to reflect on the demanding challenge of making Europe's economy more inclusive, competitive and resilient and must address the questions raised by the White paper on the future of Europe about the added value of EU policies, subsidiarity, and gaps between promise and delivery.

The Forum is a unique opportunity for decision-makers, stakeholders and practitioners to discuss how EU policies can improve the living conditions and opportunities for all European citizens against the background of globalisation, technological change and growing inequalities. It is a chance to formulate a cohesion policy response to the main economic and social challenges for the European Union and improve the delivery of results to the citizens.

The Forum will precede the adoption of the 7th Cohesion Report, so that the conclusions from the debate with civil society representatives may feed into the report.

Participation upon invitation only

The event will be web streamed.