Cross-border cooperation in the European Union: an opportunity for Europe's border regions 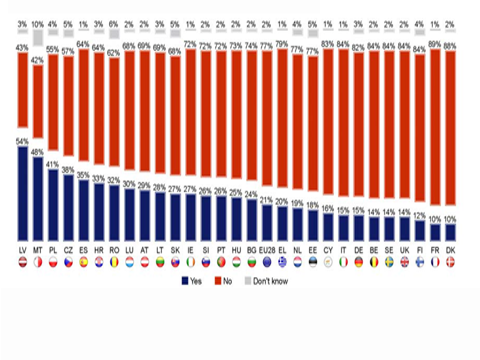 More than one third of EU citizens live and work in Europe's border regions. Those borders have a direct and indirect impact on their lives.

European Territorial Cooperation (the Interreg programmes) plays an important role in removing border obstacles and fostering cross-border cooperation. Relatively small in budget, the Interreg projects have achieved many concrete outcomes for the citizens – whether in the area of cross-border security, transport, education, energy, health care, training or job creation.

For 2014-2020, more than EUR 10 billion will be invested in cooperation between regions, of which around €6.6 billion will go to cross-border regions. This should ensure maximum impact and even more effective use of the investments.

However, a significant economic potential remains untapped in the border areas due to a lack of trust or even the existence of negative attitudes among neighbouring countries. DG REGIO therefore conducted a first-ever Eurobarometer survey to identify and map attitudes of citizens living in the border areas. The study will help arrive at more targeted EU interventions. Below the main findings:

Reasons for crossing the border to a neighbouring country:

Level of trust of people living in the border regions:

A recent Eurobarometer survey on "Citizens' awareness and perceptions of EU Regional Policy",found that only a fifth of all citizens (including those not living in border regions) were aware that EU regional funding is invested in this field. The results show that there is more work to be done to promote the Interreg programmes.

Those findings will be discussed at a high-level Conference celebrating 25 years of Interreg, which is organised by the Luxembourgish Presidency of the Council of the European Union together with the European Commission and the INTERACT Programme.