Major Projects: The EU largest investments for the beneﬁt of regions and citizens 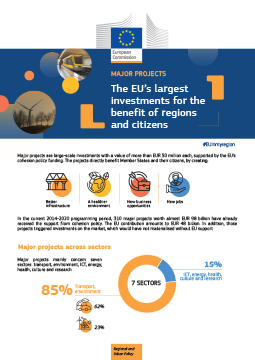 Major projects are large-scale investments with a value of more than EUR 50 million each, supported by the EU's cohesion policy funding. The projects directly benefit Member States and their citizens, by creating:

In the current 2014-2020 programming period, 310 major projects worth almost EUR 98 billion have already received the support from cohesion policy. The EU contribution amounts to EUR 48 billion. In addition, those projects triggered investments on the market, which would have not materialised without EU support.