My experience with modern board games goes back a few years. The first game that I explored more thoroughly was Settlers of Catan, a game that is considered to be the symbolic milestone of the beginning of the era of modern board games. I learned about this game around 2000 or 2001, give or take, but only started playing it intensely in 2004 or so. Up until then I played Magic: The Gathering, which was a trading card game that used collectable cards, but which explored some new mechanics and designs of analogue games of North American origin. However, as time went by, I lost interest in that game since my involvement in it required a certain level of dedication to remain in national competitions and a continuous investment of a lot of money. When I started playing it, around 1996-97, that particular world was new and vibrant but then it lost its charm even though I played it – on and off – for almost 10 years.

Still, the fondness for this type of game remained and turned into a broader social activity, which Catan favoured. In my circle of friends there was a strong computer game culture. We spent plenty of weeks where we created local networks for playing together. But, with time, logistics made this unfeasible as well. Even with easy access and Internet speed, there was not enough time to keep up these gaming habits. Life had changed. Many of us were working and in stable relationships. However, a small group of closer friends managed to maintain the habit of playing – mainly board games. We played Catan. For many years, we played that game alone, unaware that the world of board games was in turmoil. Within this hard core consisting of myself, Edgar and Hugo, we stuck to our habits and succeeded in getting our girlfriends interested in socialising through Euro-style games. At the time, we didn't even dream that there was such a distinction between different styles. We simply liked these new games. Around 2008 or 2009 – I cannot remember exactly – Edgar and I attended the first Leiriacon, the greatest and oldest convention of modern board games, which has been taking place in the Leiria district since 2005. There, we found out that there are thousands of amazing games… and we haven’t stopped playing since. We kept buying new games, especially me, since I caught the collector’s bug. The new and varied items of this creative industry amazed and still amazes me. We often played in each other’s homes and, whenever we could, we would go to the Marinha Grande monthly rendezvous, organised by Spiel Portugal, who were the organisers of Leiriacon [1]. 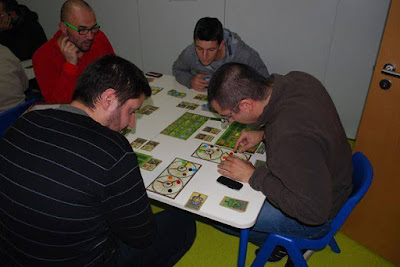 In 2014, after being challenged by the members of Spiel Portugal and because of our desire to keep developing this hobby, we started organising our own game rendezvous in Leiria. We challenged an association of which I was a member. They accepted the challenge and the community grew. The Leiria Boardgamers were created; we had a new format, but were built on developments in Marinha Grande. We met frequently and organised free gaming sessions for the local community. It was obvious that these board games were powerful tools for social intervention and innovation that could be used in multiple contexts: social integration, development of skills, play therapy techniques, alternative learning techniques, etc. In 2018, we created a new association, Asteriscos, to further develop our game-related projects. The community has been growing steadily, and we established a partnership with the parents’ association of a school in Leiria, which allowed us to work more closely with local and school communities. We started with only 3 people but today, there are dozens of us [2]. 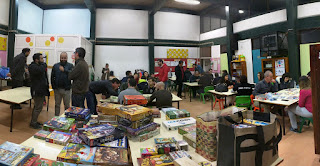 Having just provided an introduction to the history behind the use of these games, I can now move on to another adventure that started because of the need for a European project. In 2017, during the first agora (a participative virtual community) of the UrbanWINS project – which focuses on the implementation of collaborative methodologies to approach the topics of urban waste and urban metabolism – an idea was born. We needed an ice-breaker. After taking part in intensive training on collaborative methodologies at the New University of Lisbon under the directorship of Lia Vasconcelos, it became obvious to me that these projects offered a great deal of scope for the use of alternative methodologies. 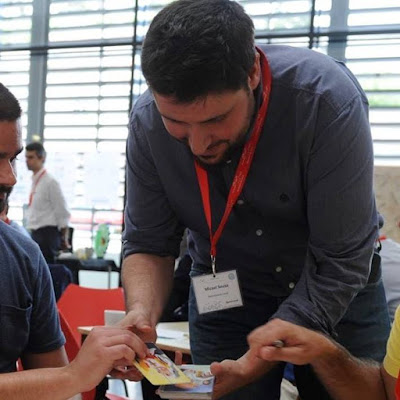 The ice-breaker that I proposed consisted in partially using one of the games from my modern board games collection. I used the Dixit cards. Through them, and their surrealist drawings, the participants in the first UrbanWINS agora in Leiria had the opportunity to talk about themselves and the problem of waste in a creative fashion. In an informal manner, the cards helped to creatively unlock participation while respecting the individuality of each participant; this seemed as if it would be essential in starting the collaborative process that would be developed afterwards… and it was [3].

This successful experience led me to test more gaming elements in different contexts. I was invited to some open classes in higher education institutions where I used games and gaming elements in order to approach certain topics. Through games, the students were able to deal with the contents of each subject in a dynamic, engaging and fun way [4]. They developed autonomy and interest in their learning. It was the students who identified the goals of the different dynamics. Through this process I developed my own methodology, which I applied in classes in the areas of tourism, heritage, leadership, collaborative work, resource management, planning, soft skills, etc. I visited the Polytechnic of Leiria and the ESTG [School of Technology and Management], ESECS [School of Education and Social Sciences], D. Dinis Business School, ISCAC [Coimbra Business School], the Faculty of Psychology and Educational Sciences at the University of Coimbra, and ISEG [Lisbon School of Economics & Management]. It has been a great adventure, which appears to be continuing to unfold; new games are being made and our growing list of experiences is facilitating the use of these tools in increasingly complex contexts [5]. 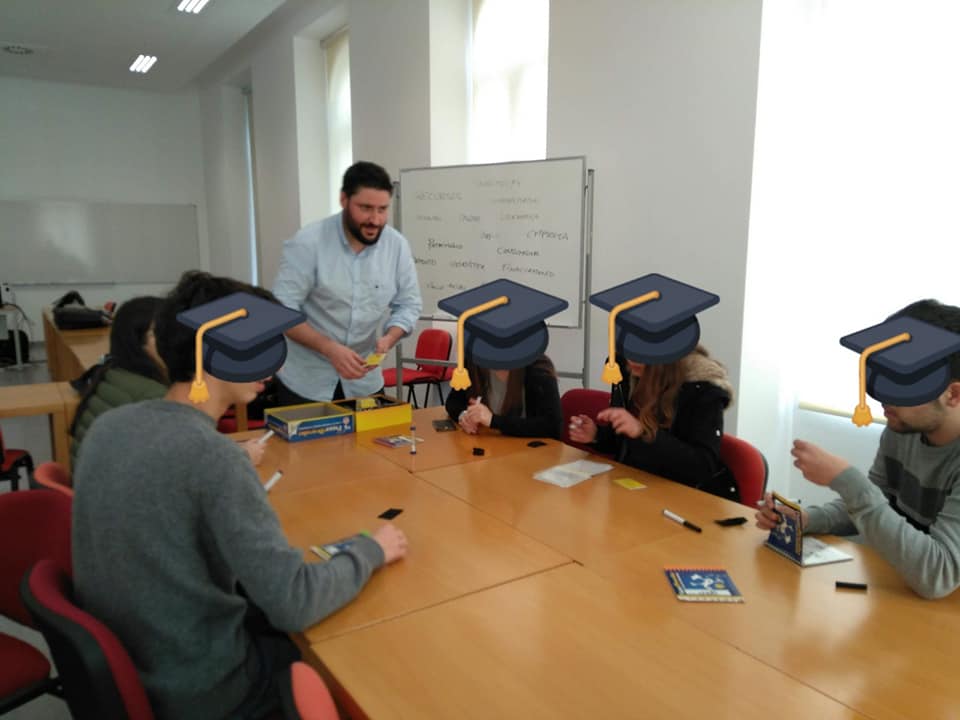 I also joined GovInt (Portuguese Forum for Integrated Governance), through my involvement in a group of collaborative methodologies where I contributed to the development of collaborative dynamics that in turn became a game [6]. 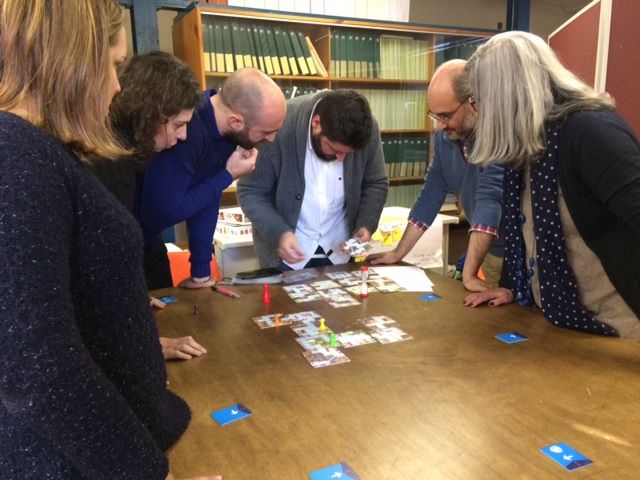 In summary, we can say that it was the innovative nature of the UrbanWINS project that opened the door to an alternative way to use the games. It allowed me to understand those collaborative methodologies that go far beyond mere participation. I was inspired by it and I later took that inspiration with me into academia where it influenced part of my research during the teaching component of the PhD in Land Planning. I understood that games can be used to promote collaborative planning and this will probably be the research path I will follow over the next few years [7].

More than simply a reference to a project, this text is a very personal narrative, showing how our life paths, our social relationships and our preferences may combine in a surprising way. I never thought I could use games as serious tools nor link them to the concept of serious gaming [8]. But the truth is, that I am getting closer to this and, in practice, it has already been shown through UrbanWINS. That said, there is still immense potential to be explored in the future and in other projects.