In the last of our four-part series focusing on the strong links between EU regional policy and the younger generation, we look at how DG REGIO’s Youth4Regions programme is reaching out to aspiring young journalists. 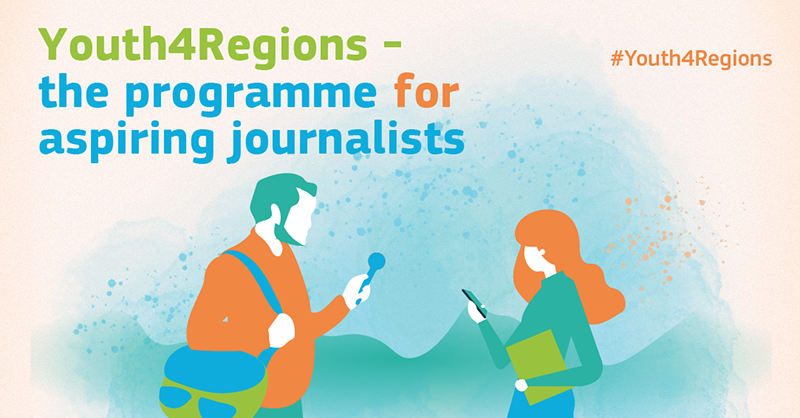 Are the journalists of tomorrow interested in the EU and regional policy? Do they want to learn more about them, discover their successes and debate their flaws? The answer to both questions is yes, as revealed by the Youth4Regions programme which, year on year, has seen a growing number of applications.

After four editions, the programme now counts nearly 100 alumni and thousands of applications received from journalism students and young journalists from across Europe.

A survey recently revealed that around 70 % of journalism students do not learn about the EU during their studies despite interest on their part to find out more about the Union and how it influences the lives of both young and old.

In addition to this gap between the educational offer and demand, the volume of disinformation and misinformation concerning the EU and its policies is also rising significantly.

In an effort to address these and other important issues, the Youth4Regions programme aims to increase awareness of the EU, particularly regional policy, by building a community of journalists who are knowledgeable and engaged with both the Union and regional policy.

In 2020, we received more than 500 applications from EU, accession and neighbouring countries. From these, we selected 33 young people to follow training on the EU, regional policy, and communication, to gain work experience in a press room and to visit European institutions and media organisations.

The programme has helped some participants to a new understanding of EU affairs, such as Perrine Dor, a Youth4Regions 2020 alumna: ‘I understood this idea of what the future of European journalism should be: the means to give a voice to everyone and the right to freedom of speech’.

Others acknowledge it has boosted their career goals, as noted by Alexandra Pavlou, who also joined the programme in 2020: ‘Youth4Regions opened doors to me. On my return home, a new page of my career awaited me.’

The programme has also facilitated the development of networks across Europe’s borders. With some Youth4Regions alumni now working for media organisations throughout the EU, it would not be surprising to see new journalism projects popping up between European countries.

Florin Rugină, the programme coordinator, underlines the importance of this: ‘The European project is very much dependent on quality, independent journalism, both for praise and for constructive criticism. Cross-border networks of journalists, learning from each other and working together, can only help the EU become an even more successful project than it is. We are happy to see the Youth4Regions programme contributing to this end.’

The Commission wants to encourage more engagement by young journalists with EU affairs. To achieve this, in 2019, it set up the Megalizzi-Niedzielski prize which is awarded under the Youth4Regions programme. It honours the memory of Antonio Megalizzi and Barto Pedro Orent-Niedzielski, young European journalists with a strong attachment to the EU and its values who passed away after a terrorist attack in Strasbourg in late 2018. The prize aims to reward and encourage promising journalists who share Antonio and Barto’s enthusiasm for the European project.

Applications for Youth4Regions 2021 will open next Monday 5 April 2021.