The global COVID-19 pandemic has disproportionately affected vulnerable communities, including third-country nationals across the EU. From the very beginning, EWSI has been tracking the impact on migrant communities in a number of key integration areas. From migrant outreach initiatives and extraordinary administrative measures to funding opportunities for the civil society response, we bring you the latest updates.

This page was last updated on 12 February 2021. Find the first EWSI update on the impact of COVID-19 on migrants here. 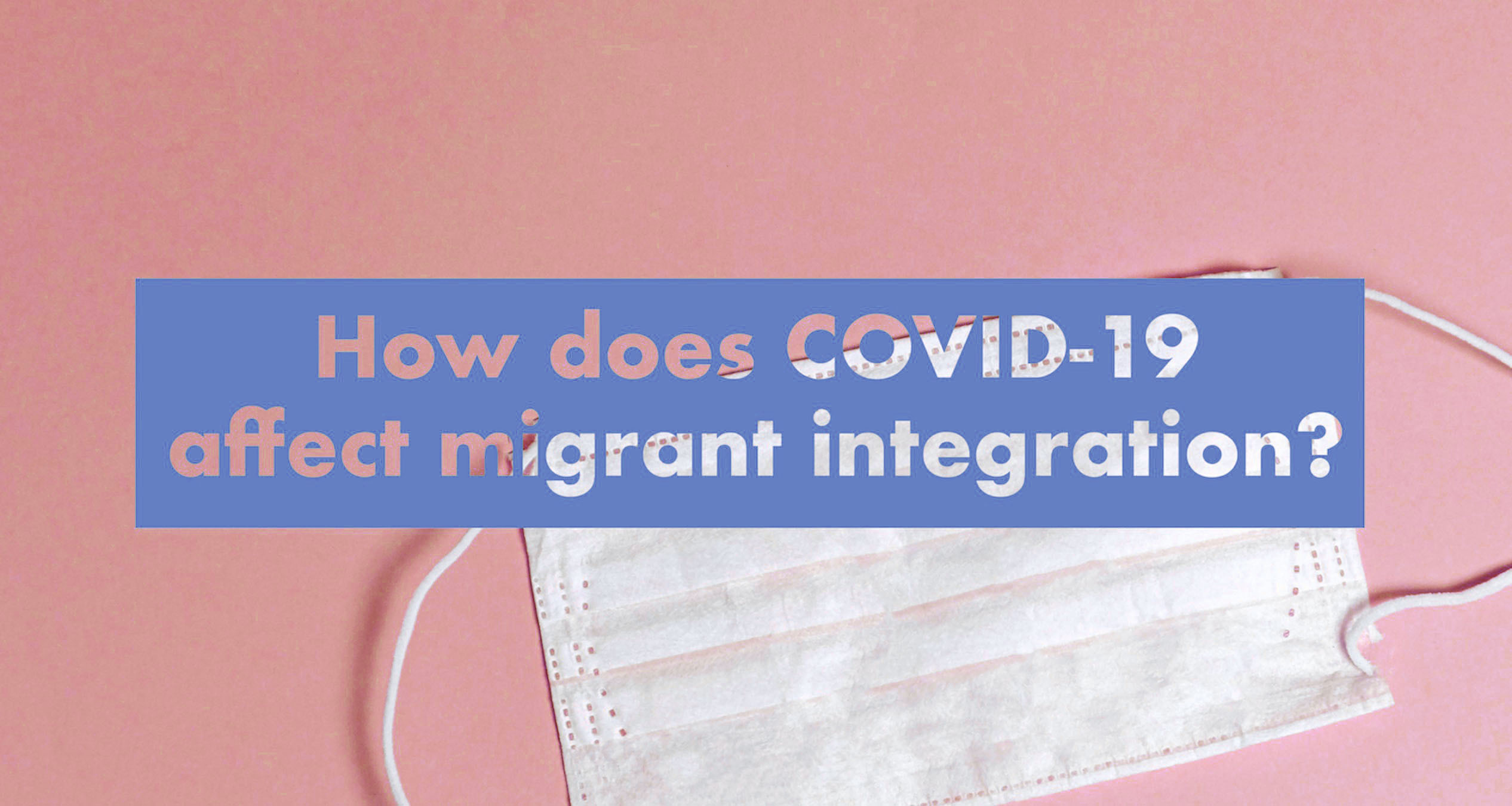 The COVID-19 pandemic has impacted procedures to apply for and obtain residence and work permits, as government offices have been reducing their services or closing entirely. The economic uncertainty many have found themselves facing has also had an impact on demand for work permits, as has the fact that many countries restricted entry for foreigners following the outbreak. The first half of this year saw the largest global drop in issuances of new residence permits ever recorded.

In many countries, a large number of key workers on the ‘frontline’ in the pandemic response - such as those working in personal care, transportation, agriculture or food processing - are migrants. As a result, migrants make up one of the groups most exposed to the virus, and studies in a number of countries have found the risk of infection to be higher for migrants than it is for native-born citizens (e.g. in Ireland). In France, the government recognised the dedication of migrant workers who have put their own health on the line in order to support others by accelerating the processing of key workers’ applications for French citizenship.

Despite their general prevalence in key services, the employment rate among migrants has dropped since the virus outbreak. In Spain, for example, unemployment in the migrant population had risen to almost 25% by early September 2020.

In Slovakia, where employment among migrants had already dropped significantly by the middle of the year, legislation was amended in October to permit extensions to residence permits and the temporary relaxation of some employment conditions, in order to offer migrants a little more flexibility. In Romania, measures have been introduced to facilitate work placements for migrant workers who have lost their jobs.

Spain lost many of its seasonal agricultural workers as a result of pandemic restrictions worldwide, which led to a huge gap in its workforce at a crucial time of year. To mitigate the effects of this, the Spanish government extended residency permits for young migrant agricultural workers. It also suspended several other administrative deadlines relating to residence and work permits. In Italy, where the agricultural sector is also highly dependent on migrant labour, the government approved pathways for the regularisation of status for agricultural and domestic care workers.

The first COVID-19 update on EWSI stated that while many countries have sought to increase their administrative flexibility when it comes to permits, restrictive measures have also been introduced. Six months on, this is still the case. The amendment adopted by Latvia allowing for the revocation of temporary residence permits of third-country nationals (under certain conditions) remains in place, for example, and other countries have either made similar changes or failed to introduce support measures for badly-affected migrant communities. Migrants employed under civil law contracts in the services sector in Poland, for example, have not had sufficient protection of their employment rights, and the right to apply for international protection has been limited.

Responding to the pandemic: Funding opportunities

In an effort to help civil society and other stakeholders deal with the negative effects of the pandemic, several states and institutions announced funding initiatives for programmes supporting third-country nationals. In Bulgaria the Iris Programme supports children affected by the pandemic and is accepting applications on a rolling basis.

On 1 July the European Commission presented two proposals for the post-COVID Recovery plan for Europe, which highlight the potential of people with a migrant background:

One crucial part of the response to the COVID-19 pandemic has been community outreach, particularly within those communities that are more vulnerable or socially excluded. To ensure that migrants are not overlooked in the response, civil society organisations have been translating and communicating vital information to their communities. Authorities have also made an effort to communicate vital information in multiple languages.

In Poland, outreach efforts seek to clarify misunderstandings by letting people know that they can receive treatment for the virus even if - as migrants - they are not covered under the typical national health insurance plan. In the UK, the government announced in February (2021) that all migrants would be eligible for vaccination, including those without legal residence in the country.

By contrast, in Slovakia the Ministry of Health launched a campaign aimed at reducing public scepticism towards the vaccination but failed to make campaign materials linguistically or culturally accessible to marginalised migrant groups.

Examples of translation initiatives include:

Importantly, migrant-organised groups have been very active in sharing information among migrant communities. Many are also sourcing and creating protective equipment and providing free meals, as seen in Poland and the Czech Republic.

Throughout the pandemic, some of Europe’s most vulnerable groups have been left in unfavourable living conditions and with little protection. In Spain, for example, many key workers on farmlands live in slum-like environments and have not been provided with personal protective equipment.

Detention centres and camps have also been cause for serious concern, as residents report little opportunity for social distancing and not enough protective equipment to go round. In the UK, three separate immigration removal centres have seen outbreaks of the coronavirus.

On the Greek islands volunteers and officials continue to voice concerns about the living conditions of asylum seekers. Organisations in several countries, including Lithuania and Poland, appealed to authorities to welcome residents from Moria camp in Lesvos. Despite a serious fire and insufficient protection measures thousands of residents - including unaccompanied minors - were left unsupported and vulnerable to infection.

After initially closing centres because of their unpreparedness to protect residents against COVID-19, Spain reopened migrant detention centres in September. In Malta, the Hal Far reception centre was placed under mandatory quarantine following positive test results among the centre's 1 000 residents. Hal Far is now running an online Language Cafe, bringing people together despite their physical separation.

Several recent studies explore the effects of the COVID-19 pandemic on particular social groups, and many more are set to be carried out over the coming months.

In Portugal, one such study concluded that migrant families have been more severely impacted by the virus than native families on almost all fronts, particularly in access to healthcare services. In Poland research showed that migrant women were most negatively affected by the mandatory quarantine, and highlighted the truly essential role played by civil society organisations in facilitating migrants’ access to education and healthcare services. Meanwhile, 72% of respondents to a survey conducted among minority communities in the UK felt that the first lockdown period of 2020 served to reinforce racial disparities.

In Cyprus the first installation of a three-part study was published in February. It analyses how the pandemic has affected refugees, migrants and asylum seekers, and provides an overview-based timeline of relevant government actions and their impact.

In Italy, a collaborative initiative has been set up to facilitate research and debate on how migrant workers have affected and are affecting the resilience of essential services during the pandemic. Another research initiative in the Netherlands looked at how local NGOs were coping with the switch to online support.

The World Health Organization published an advocacy brief identifying the different impacts of the pandemic as reported by over 30 000 refugee and migrant individuals, and also produced technical guidance outlining evidence, knowledge and best practices on the integration of migrant health data.

After it became clear during the pandemic that migrants make a crucial contribution to Europe's economies and public services, the European Commission and the European Social and Economic Partners renewed their commitment to the European Partnership for Integration. This reaffirmed the importance of a multilevel, cross-sectoral approach for early integration into the labour market.

The Committee on Bioethics at the Council of Europe published a statement calling for equitable access to vaccination during the current COVID-19 pandemic and all future pandemics.

Teachers across Europe took part in a survey on the inclusion of vulnerable learners (such as children with migrant background) during the COVID-19 crisis, conducted by SIRIUS - Policy Network on Migrant Education. The findings will be published in the 2020 edition of Sirius Watch.

The European Migration Network released two other editions in its series of Informs on the impact of the pandemic:

Inform #2: Impact of COVID-19 on international students in EU and OECD member states;

Inform #4: The impact of COVID-19 on remittances in EU and OECD countries.

Keep an eye on the European Web Site on Integration for the next update on COVID-19 as it relates to migrants in EU Member States. This page was last updated: 12 February 2021.