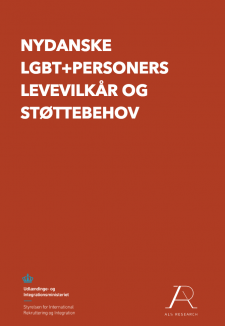 This report by ALS Research - funded by the Danish Agency for International Recruitment and Integration (SIRI) - finds that overall, LGBT+ people with ethnic minority background (defined within the report as those who are 'first and second-generation migrants or refugees from non-Western countries') are a very vulnerable group in Denmark. Their living conditions are significantly poorer than those of other LGBT+ people living in the country.

The report's findings align with a previous report from 2015, implying that no action has been taken to improve conditions for LGBT+ people with ethnic minority background since then. These findings include the following:

The report also includes a number of recommendations from the interviewees and from professionals working with the target group. One of the stress factors mentioned by many is the fact that even though they were born and raised in Denmark, they have been unable to secure Danish citizenship as they cannot meet the criteria for work and income. They fear they will be deported to a "home country" where they will be in danger due to their sexual orientation or gender identity.

The most common countries of origin among the respondents are Turkey (14%), Pakistan (10%), Lebanon (7%), Iraq (6%) and Syria (6%). This is representative of the general make-up of non-Western immigrants in Denmark.

Data for the report was gathered via questionnaires answered by 1 200 respondents and qualitative interviews with 30 people, carried out between August 2021 - February 2022. A number of civil society organisations and professionals also participated.