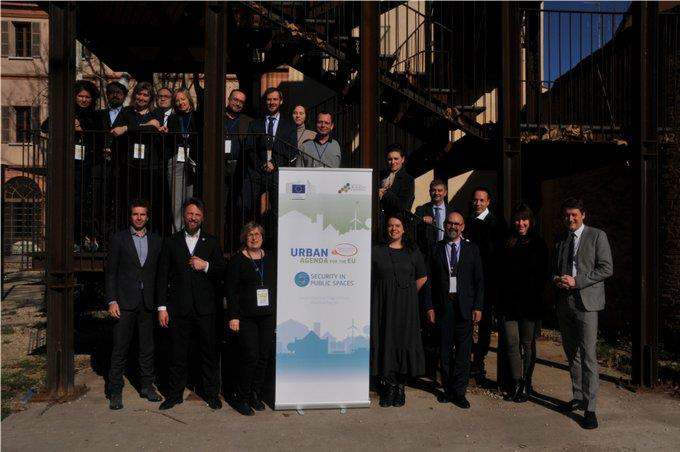 This open event organised by the Unione dell Romagna Faentina provided an opportunity to bring together Partners involved in the Urbana Agenda Partnership and the recently launched URBACT Urbsecurity network, as well as several representatives of Italian regions and cities, and the European Commission. It was opened by Andrea Luccaroni (URF) and Andrea Volkmer (DG HOME), who set the scene. The objective of this session was to discuss how to design more effective security policies based on multilevel governance and multi-stakeholder cooperation.

The discussion was followed by presentations from the coordinators of the Urbsecurity network and the Urban Agenda Partnership, looking at possible avenues for collaboration.

From the UA Partnership perspective, Sebastien Viano presented the background of the Partnership, its composition, key priority areas identified in the Orientation Paper and the scope. He presented the Action shortlisting process as well as the final list of Actions that the Partnership is working on. (See Sébastien’s interview from the EWRC here.) He encouraged UrbSecurity members to comment on the Action Plan and participate in the public feedback process which will be launched in the coming months.

The joint event was closed with a roundtable discussion on the two dimensions of integrated governance. Panellists were François Gallega (DG REGIO), Luisa Gonçalves (Leiria), Giannfranco Tedesco (Turin), Gian Guido Nobili (FISI) and Caterina Brancaleoni (Emilia Romagna Region). They agreed on the importance of reinforcing collaboration on both axes, advocating for increased collaboration between national governments and urban authorities when it comes to security challenges.

The discussion of the Actions was based on 4 guiding questions, and went through all 6 Actions:

The conclusions of the discussion was an agreement that there is a good basis to bring all 6 Actions forward although maybe not all Actions can be carried out in parallel. Clarifying roles and working arrangements is now crucial in moving forwards.

The second day in Faenza kicked off with discussions on the different chapters of the Action Plan, followed by discussions of the next steps. Public feedback processes will be taking place in the coming months and will be open for 6 weeks. Partners are encouraged to invite stakeholders to participate in the consultation. All information will be made available on Futurium.

While formal implementation of the Action Plan will officially begin after it’s approval, preparatory work can kick off on several fronts, including developing an implementation plan.

The next meeting will be hosted by Madrid in late spring/early summer, after the consultation process has been completed.