The Partnership on Inclusion of Migrants and Refugees is one of the pilot Partnerships of the Urban Agenda for the EU. It has developed a clear set of actions and recommendations addressing better funding, knowledge exchange and regulation, summarised in the Action Plan.

The Partnership was present at this year’s CITIES Forum, hosted by the City of Rotterdam on 27 and 28 November 2017, with a workshop. The session was all about showcasing the concrete challenges that migrants and refugees face and the policy responses that cities (can) provide. 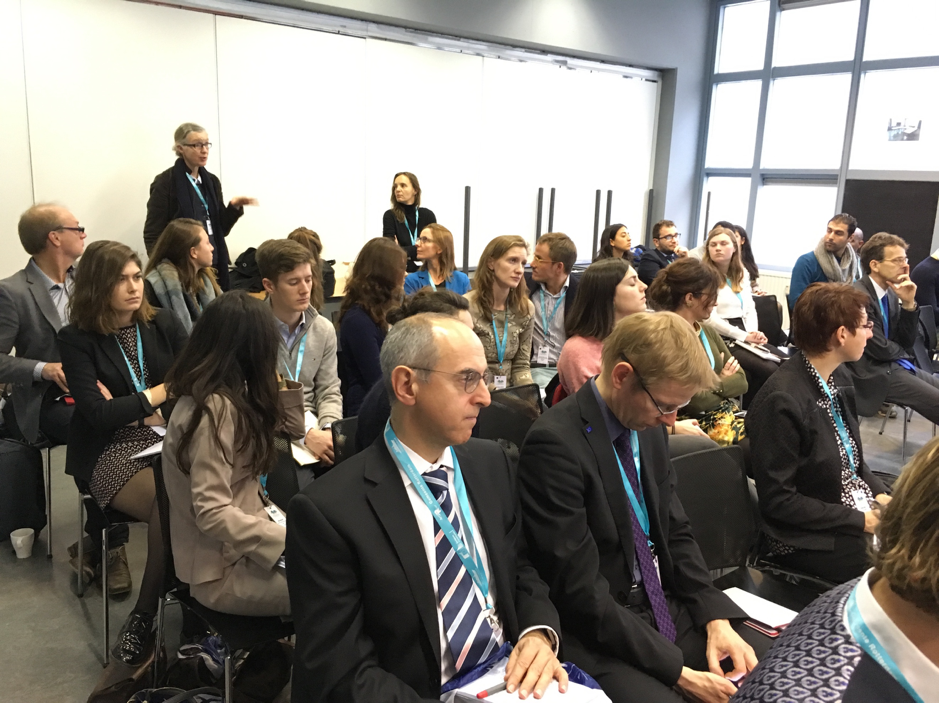 The workshop was generously hosted by one of the many Neighbourhood Houses (Huizen van de Wijk) in Rotterdam. Jeanelle Breemer described Rotterdam’s integration policy, which has a strong focus on early language acquisition and of activity provision to permit holders. Marieke Wissink’s presentation of the Dutch Council for Refugees (VluchtelingenWerk Nederland) showcased the people-centred work of volunteers trying to facilitate refugees’ settling in their new home city. Personal stories of the life after fleeing, shared by Yonas B Woldemichael and Elias Haile, allowed important insights into the individual impact of integration policies on refugees. 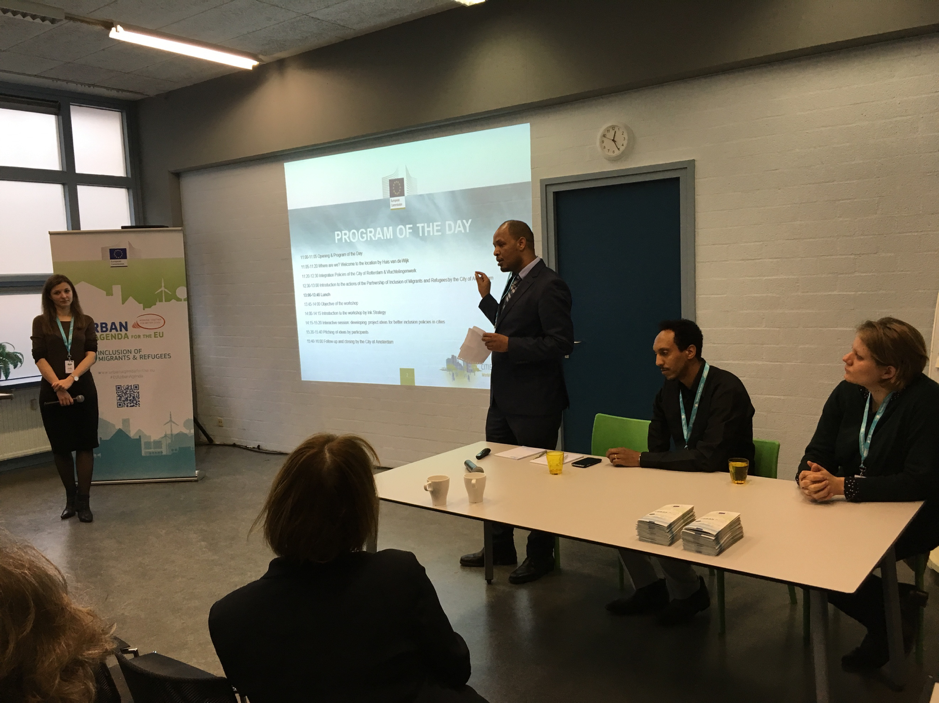 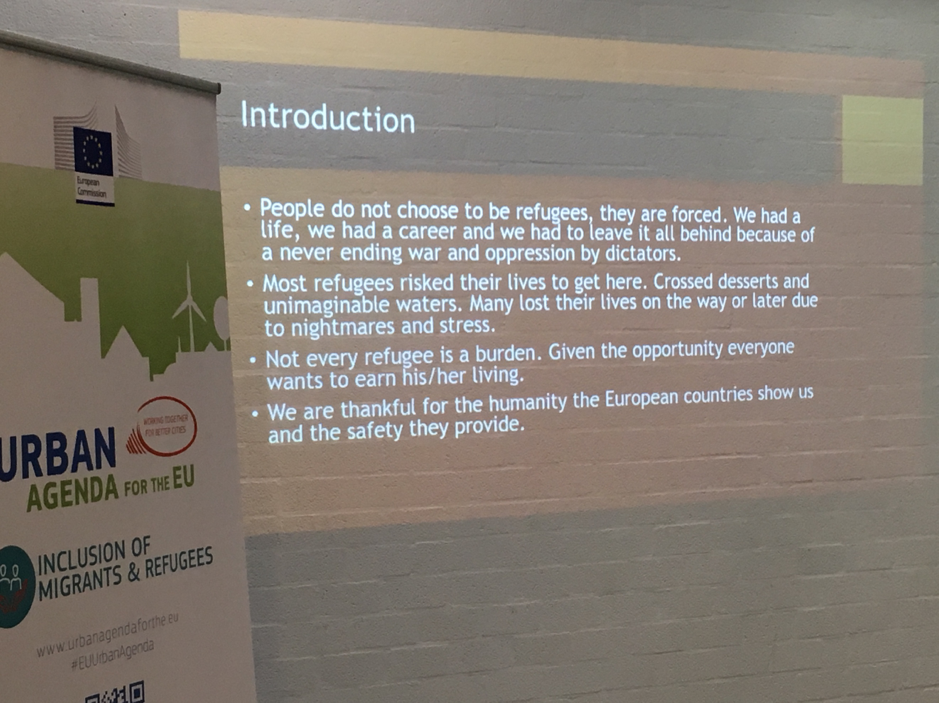 Turning back to the concrete Partnership work, Sabina Kekic (co-coordinating the Partnership on behalf of the city of Amsterdam) and other action leaders presented the proposed actions in detail. Carlos Mascarell (Council of European Municipalities and Regions), Gerry Muscat (European Investment Bank), and Thomas Jézéquel (EUROCITIES) presented the actions under their personal responsibility. All actions will be implemented in the upcoming year and beyond. 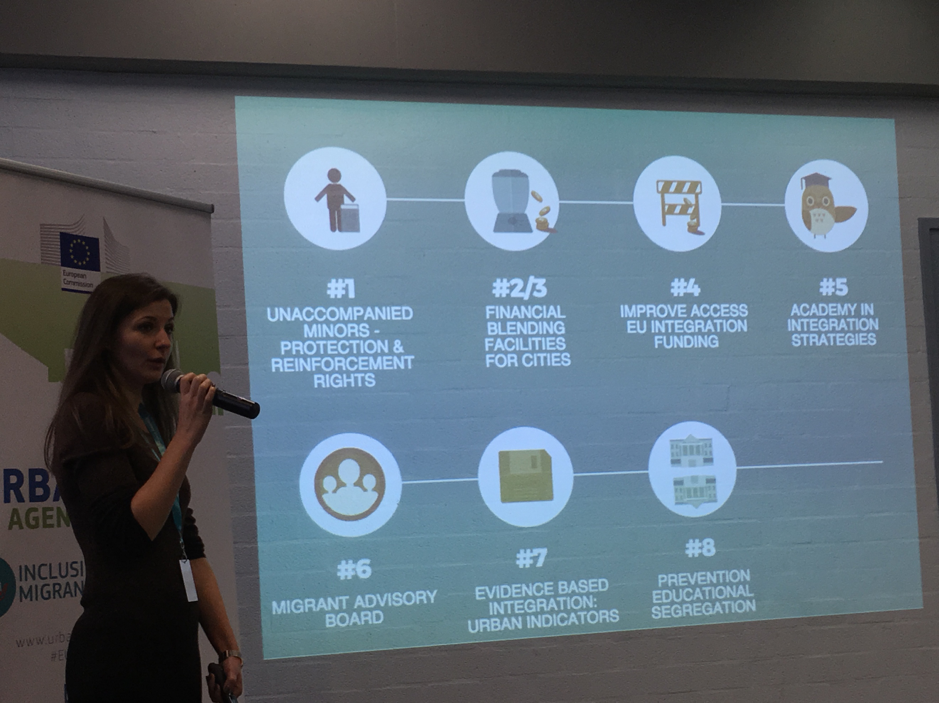 During afternoon breakout sessions, all participants were invited to design local-level policy recommendations and actions building on the outcomes of one of the Partnership’s previous conferences. On 17 May 2017, the city of Amsterdam had invited (former) migrants and refugees to provide input to the Partnership’s work, objectives and draft actions. This feedback partly informed the Action Plan, but also produced some great project ideas which had no clear European, but rather a local focus.

Therefore, the Partnership decided that these concrete projects – including measures against loneliness such as buddy programmes, more comprehensive local efforts for language acquisition, and awareness campaigns to better understand refugees' experiences – should be picked up by local actors. In its Action Plan, the Partnership proposes the creation of a European Migrant Advisory Board (action no. 6). The Board (read more here) will start its work in January 2018 and will also be responsible for the implementation of the above-mentioned local projects in their cities.

Read a summary of the rest of the two-day conference here. The Partnership’s Action Plan is available here.

Tags:
CITIES Forum 2017Cities ForumInclusion of migrants and refugeesworkshopadvisory board