Who and how? - SDMX InfoSpace

However, SDMX is also now being used by organisations outside the world of official statistics. In theory, it may be of interest to any organisation that collects, processes, analyses and disseminates statistical data and metadata.

Within a given organisation, there are generally three roles and teams in an SDMX project: initiators, represented by a business unit that has a business case for an SDMX project; facilitators, represented by IT units that are involved with either developing tools or establishing the necessary IT architecture, as well as SDMX specialists who develop the DSDs or MSDs; and implementers, who provide the data (implementing the project to provide SDMX-compliant files).

An SDMX project typically brings together statisticians, economists, methodologists, and experts in dissemination and information technology. This is why it is vital for people to 'speak the same language', i.e. use shared standards and a shared vocabulary.

How is SDMX implemented?

An SDMX project follows successive project management steps: preparation, then compliance, implementation and production. There is a working checklist of the steps required in an SDMX project, which are summarised. A simplified abstraction of this is shown below, adapted to those involved within the European Statistical System (ESS). 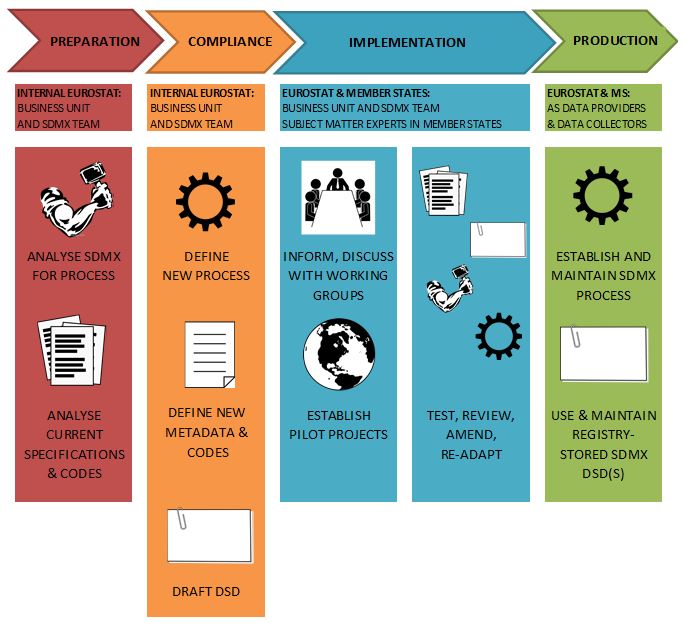 The preparation phase of an SDMX project is arguably the most critical. This is the phase in which the initiators and facilitators determine the project's objectives, scope, expected benefits and outputs. It is the moment to specify needs, plan and organise. Some of the key questions to be asked are inter alia: Why do you want SDMX? What is the timetable? What risks are involved? What production systems, file formats and code lists are currently in use? What is the frequency of data flows? Who will be involved? By the end of this phase, the goals of the SDMX project should be clear. So should the timetable for implementation, a draft project plan and roles and responsibilities. The key decision is whether to go ahead with the project or not.

The compliance phase is arguably the most time-consuming. This is the phase in which the initiators and facilitators design the system and plan the sequence of the workflow. Steps are taken to analyse the current exchanges, decide what can be reused, define the concepts, define the DSD matrix and design supporting artefacts.

The implementation phase brings together facilitators and implementers. At this building stage, SDMX artefacts (particularly the DSDs) are made available (in something called the SDMX Registry), the appropriate IT infrastructure is established, pilot projects are conducted (testing and review), last changes made, the roll-out schedule agreed and support provided.

The production phase is the ultimate goal, when SDMX-compliant data and metadata can be used in exchanges. SDMX artefacts will continue to need regular maintenance, reflecting the need to be flexible to accommodate new coverage, new needs, new codes, etc.