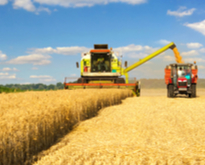 Production was principally located in lowland regions characterised by large plains, a temperate climate and relatively modest levels of rainfall. The highest levels of harvested production generally ran in a band of regions from northern France, through Germany, extending into eastern regions of the EU along the floodplains of the Danube.

In 2018, the two regions with the highest levels of harvested production of common wheat and spelt were Centre — Val de Loire (4.4 million tonnes) and Picardie (4.3 million tonnes), both in France. Three other French regions — Champagne-Ardenne, Nord-Pas de Calais and Pays de la Loire — were also among the 10 EU regions with the highest levels of production.

Would you like to know more about agricultural statistics at regional level?