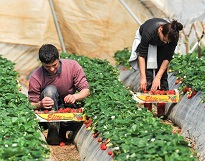 In 2019, the employment rates for foreign citizens from outside the EU were generally lower than for citizens of other EU Member States and nationals in the majority of EU regions.

In 31 regions (out of 171 with reliable data), less than half of non-EU citizens were in employment. Among these, there were nine regions where the employment rate was below 40% and in the French overseas regions of Guyane and Mayotte as well as in the Belgian region of Prov. Liège the rate was even below 30%.

In contrast, the highest employment rates (excluding results with low reliability) were recorded in Severozápad, Jihovýchod, Jihozápad (all in Czechia) and Sostines regionas (the capital region of Lithuania), where more than 85% of non-EU citizens aged 20-64 years were in employment. 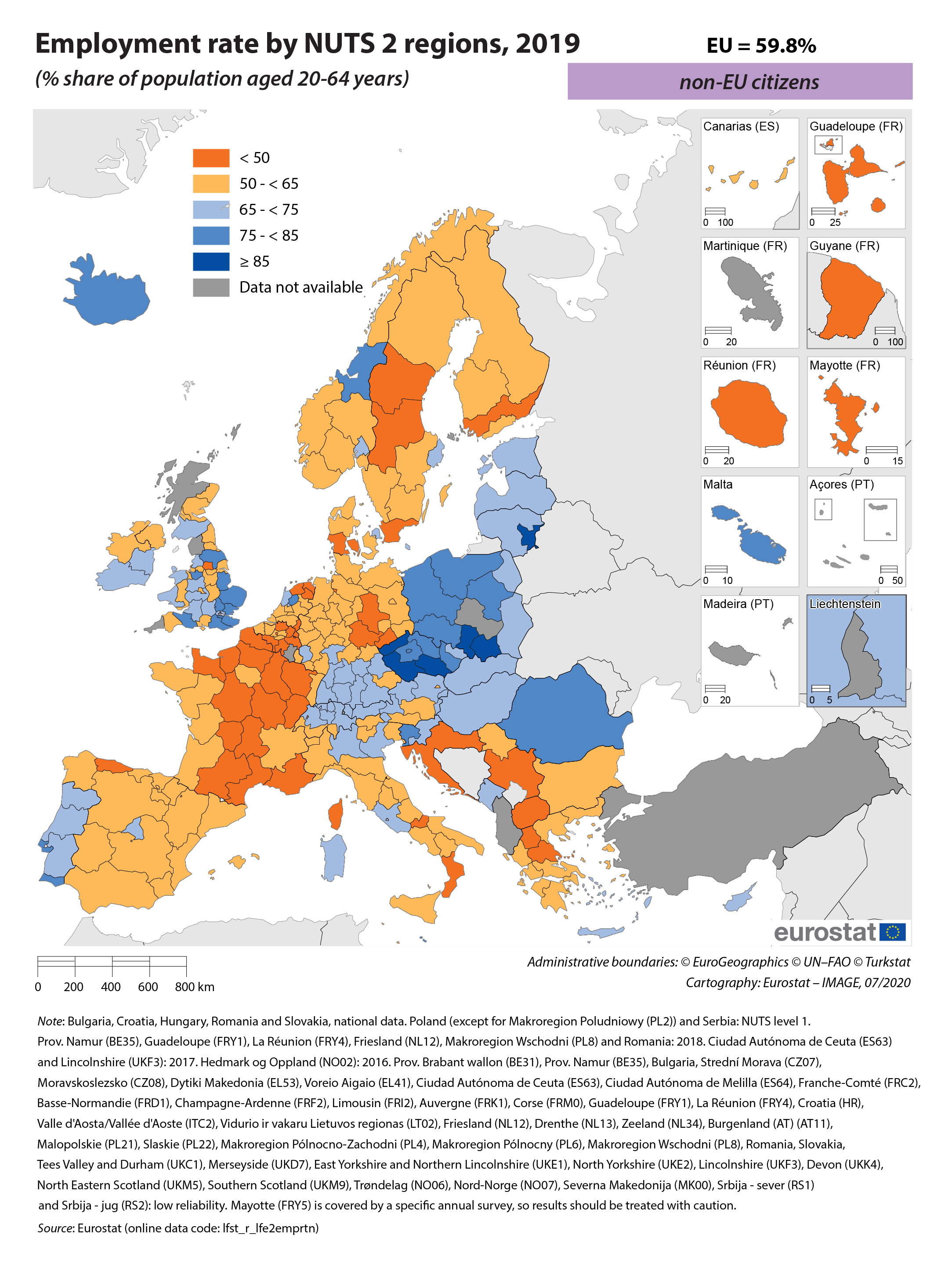 Regional employment rate for citizens of other EU Member States

For citizens of other EU Member States, a regional employment rate above the Europe 2020 target of 75% was observed in more than half of all regions across the EU in 2019 (59% of all the EU regions for which data are available and reliable).

The highest employment rate was recorded in the Dutch region Flevoland (93%). There were 12 more regions (with reliable results) where the rate was more than 85%, among which four each in Czechia (Praha, Moravskoslezsko, Severozápad, Severovýchod) and Germany (Niederbayern, Oberfranken, Freiburg, Lüneburg) and one each in Sweden (Övre Norrland), Malta (one region at this level of detail), Austria (Salzburg) and Portugal (Área Metropolitana de Lisboa).

In contrast, the regions of Puglia and Calabria in Italy as well as the region of Attiki (NUTS level 1) in Greece recorded employment rates for citizens of other EU Member States that were below 50%. 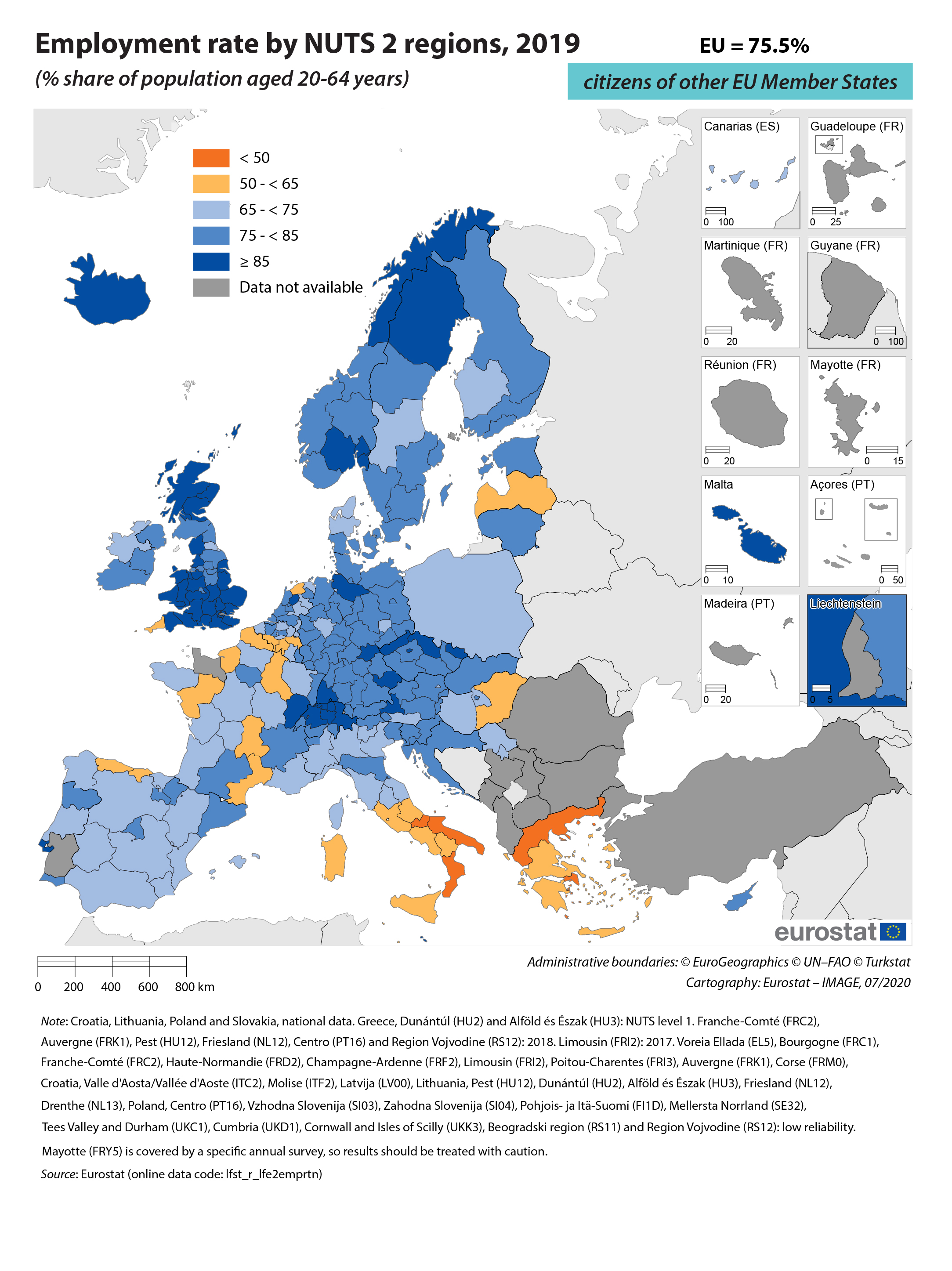 Also for nationals, a regional employment rate above or equal to the Europe 2020 target of 75% was observed in more than half of all regions across the EU in 2019 (51% of all the EU regions for which the data are available and reliable).

The highest regional employment rates for nationals were recorded in the Swedish regions of Småland med öarna (87%) and Stockholm (86%). Shares of 85% or more were also observed in four regions in southern Germany (Oberbayern, Stuttgart, Tübingen and Freiburg), a Finnish region (Åland) and another Swedish region (Västsverige).

At the other end of the range, the lowest regional employment rates for nationals — below 50% — were in three regions in the south of Italy: Campania, Calabria, and Sicilia. 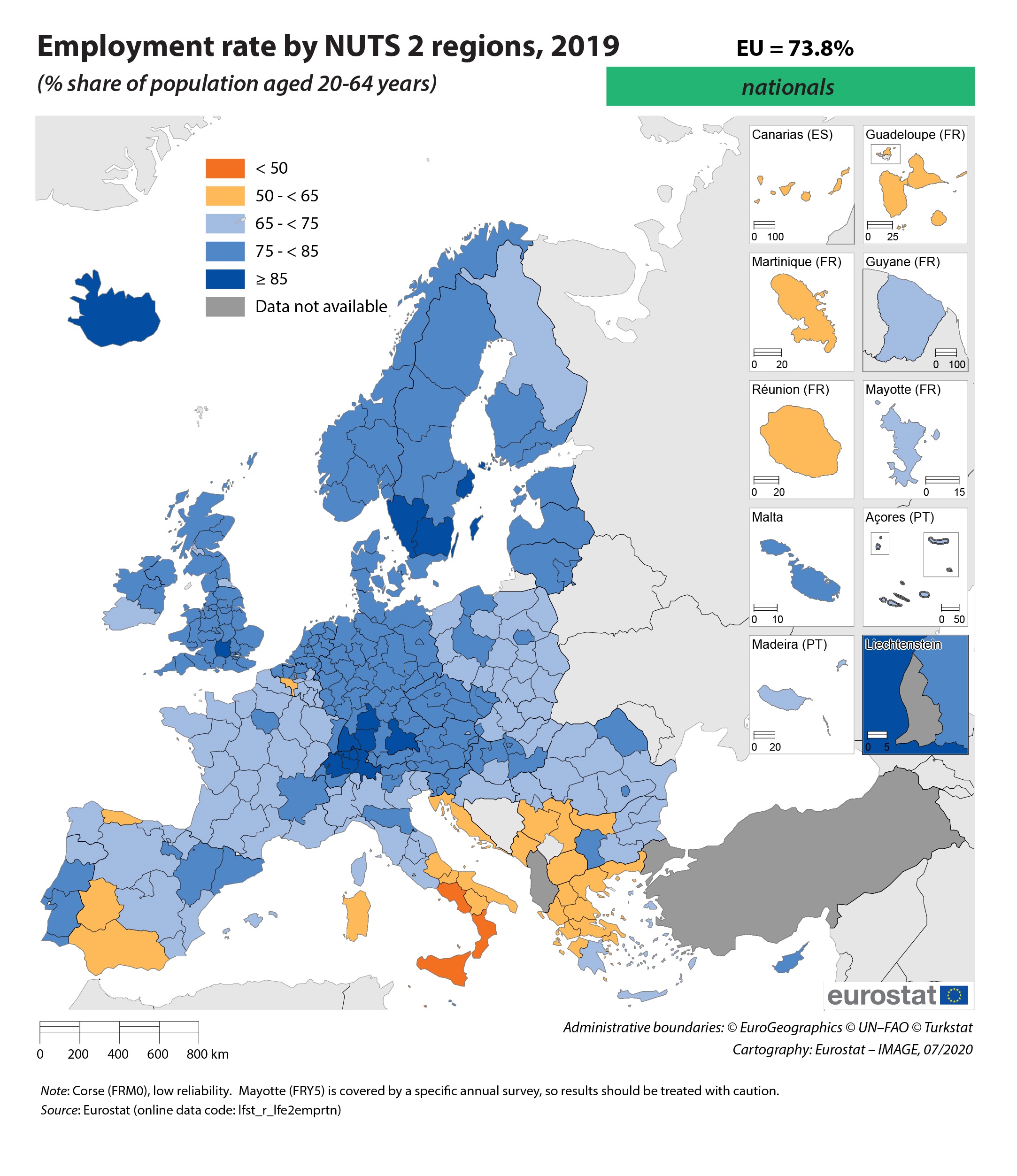