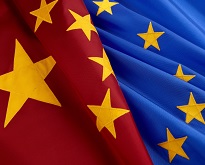 From the period 2007 to 2017, the EU ran a trade deficit (meaning that they imported more than they exported) with China. This trade deficit has fluctuated slightly, but has increased overall during the period and reached EUR 176 billion in 2017.

For both EU exports and imports with China, "machinery and vehicles", "chemicals" and "other manufactured goods" dominate. Together these manufactured goods accounted for 85 % of EU exports to and 97 % of imports from China. "Motor cars and vehicles" were the EU’s most exported product to China, whereas "telecommunications equipment" was the main product imported into the EU from China.

The Netherlands and Germany: main traders with China among the Member States