The main statistical objective of the EU Labour Force Survey (EU-LFS) is to divide the population of working age (15 years and above) into three mutually exclusive and exhaustive groups — persons in employment, unemployed persons and persons outside the labour force (also called the economically inactive persons) — and to provide descriptive and explanatory data on each of these categories.

While demographic data are gathered for all population age groups, questions relating to labour market status are restricted to persons in the age group 15 years or older.

Depending on the labour status of individuals (employed, unemployed, outside the labour force) different variables are collected.

Typology to classify the statistical information (variables) of the EU-LFS 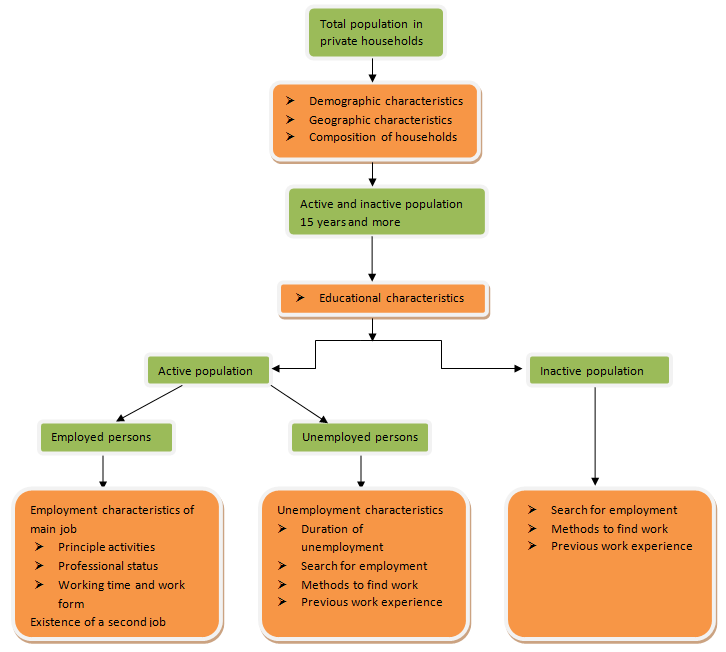 To ensure that the statistical results are comparable across countries and over time, the EU-LFS

Main definitions of the EU-LFS

Employed persons are persons aged 15 years and over who, during the reference week performed work, even for just one hour a week, for pay, profit or family gain or who were not at work but had a job or business from which they were temporarily absent because of something like, illness, holiday, industrial dispute or education and training.

Unemployed persons are persons aged 15-74 who were without work during the reference week, but who are currently available for work and were either actively seeking work in the past four weeks or had already found a job to start within the next three months.

People outside the labour force (also called economicaIly inactive persons) are those classified neither as employed nor as unemployed.

For an overview of the concepts and other methodological issues, please see:

For detailed information on the classifications used, as well as for access to the explanatory notes and user guide describing the variables, and to national questionnaires used to collect the data, please see:​ EU Labour Force Survey – Documentation (Statistics Explained)

Direct access to the explanatory notes, which contain detailed information on the definition of each variable: