ESA Supply, use and Input-output tables

What are the FIGARO tables?

FIGARO stands for ‘Full International and Global Accounts for Research in input-Output analysis’. They are also known as EU inter-country Supply, Use and Input-Output tables (EU IC-SUIOTs).

FIGARO tables are a new statistical product of the integrated global accounts for economic modelling. They link national accounts and data on business, trade and jobs for the EU Member States, the United Kingdom, the United States and a selection of other non-EU countries which are the main EU trade partners (Argentina, Australia, Brazil, Canada, Switzerland, China, Indonesia, India, Japan, Republic of Korea, Mexico, Norway, Russian Federation, Saudi Arabia, Turkey, South Africa) represented in the OECD ICIO (Inter-Country Input-Output tables); a ‘rest of the world’ region completes the FIGARO tables.

At an international level, the FIGARO tables contribute as much as possible to the OECD ‘Global regional TiVA initiative’ and to the compilation of the OECD global inter-country Input-Output tables by providing data for the EU and its Member States.

What is their value added?

Inter-country Supply, Use and Input-Output Tables typically aim to support the analyses of the economic, social and environmental consequences of globalisation by using studies on competitiveness, growth, productivity, employment, environmental footprints and international trade (e.g. global value chains). The FIGARO tables aspire to be the EU reference tool for policy makers in the above mentioned domains.

The timely provision of official statistics is crucial for EU policy analysis; therefore, projection methods are used to obtain the most recent estimates of the EU Inter-country Supply, Use and Input-Output table. These are outlined in the methodology of the FIGARO tables.

The FIGARO tables respect the same quality standards as these official statistics.

What does FIGARO tell us about trade and jobs in the EU?

Employment and trade policies are elements of the six European Commission priorities. For such policies, it is of major importance to provide empirical evidence about the close relationship between employment and trade in our increasingly globalised world.

Concretely this means: In 2019, EU exports to non-EU countries supported around 37 million jobs in the EU labour market, representing 17 % of EU total employment.

More details on these results are available in the database. For the years 2010 to 2017, they cover the 27 EU economies and 64 industries, and for the years 2018 and 2019 21 industries. The available files provide a large amount of statistics for detailed analysis, such as the examples given below.

Example 1: In 2019, manufacturing exports from Germany to non-EU countries supported the employment of around 24 000 people in the manufacturing industry in Czechia, representing 0.4 % of their total employment.

Example 3: In 2019, nearly half (48 %) of all jobs in the EU that were supported by exports to the rest of the world were located in three Member States, with 9 million jobs in Germany and almost 4.5 million jobs each in France and Italy (see Figure 1). 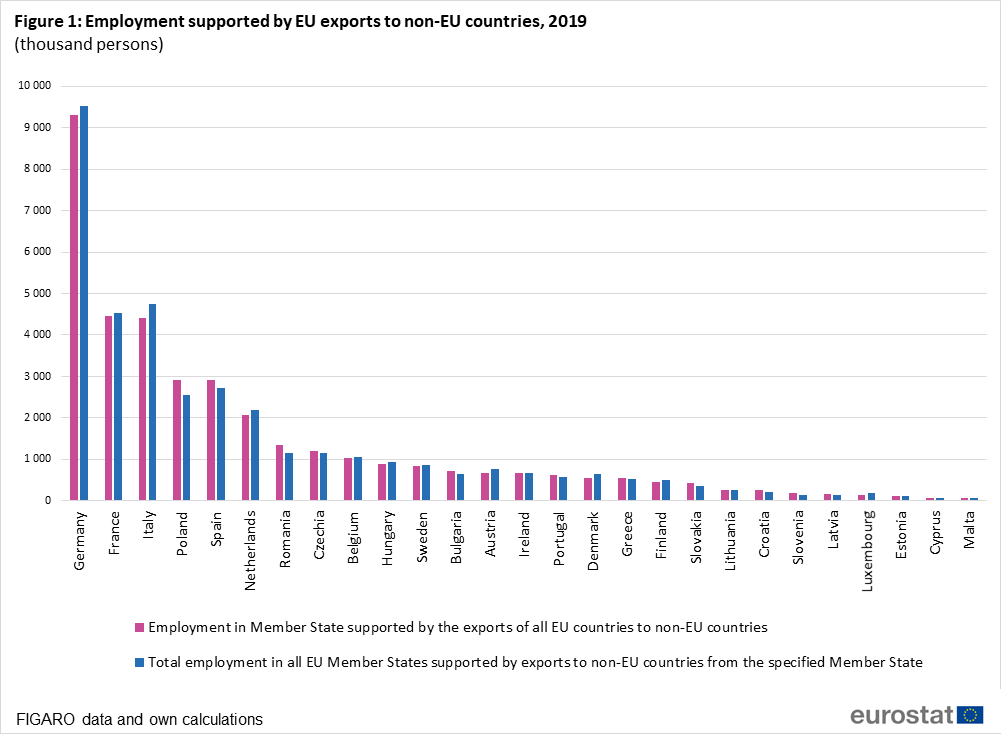 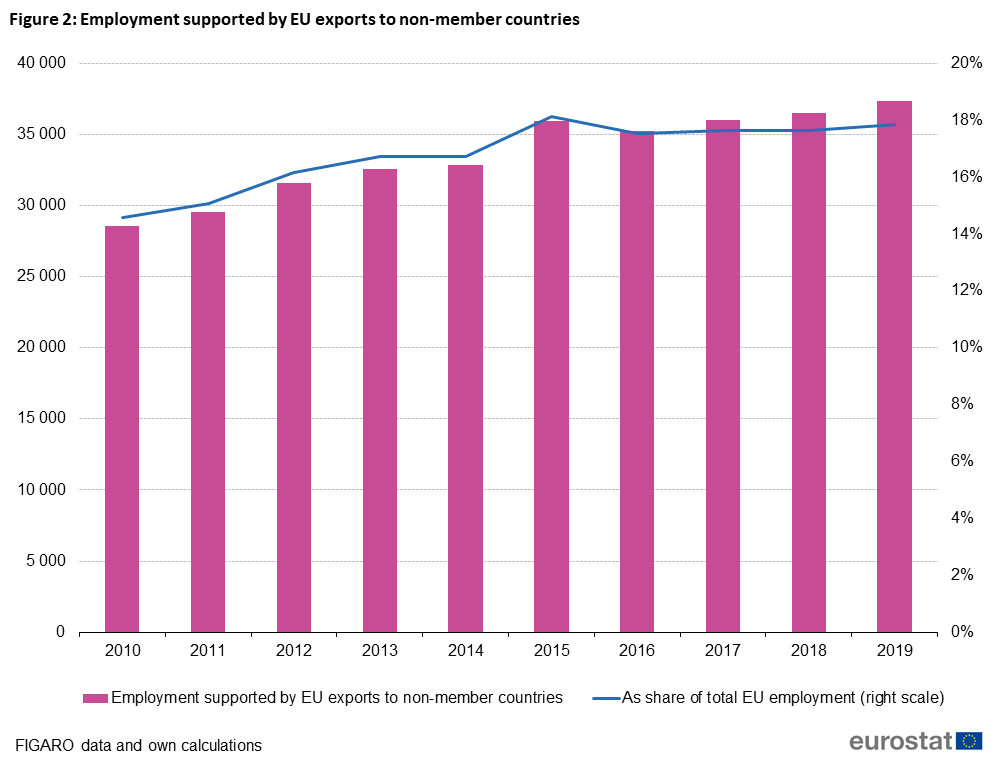 For further information, please read our  article in Statistics Explained.

What is their coverage?

The values in the FIGARO tables are expressed in million euros, in current prices and valued at basic prices. They are benchmarked to the latest available macroeconomic aggregates.

The FIGARO tables present the relationship between the EU economies, the United Kingdom and the United States at a detailed level of 64 industries and 64 products, as defined in the ‘ESA 2010 National accounts transmission program’. The FIGARO data for the remaining EU partner countries come from the underlying data of the OECD TiVA database and cover 30 industries/products, in line with the OECD classification of 36 industries. The OECD-ICIO data used here were released in December 2018; their time series spans from 2010 to 2015 and Eurostat has made projections for the following years up to 2019. These estimates will be progressively replaced when new OECD TiVA and ICIO releases will become available.

For every release, Eurostat projects national SUTs of the two latest years and benchmarks them to the latest available macroeconomic aggregates at the level of 21 industries, which is an aggregated version of the 64 industries. As a result, Eurostat will publish the last two time periods of the overall series only with 21 industries/products for the EU Member States, the United Kingdom and the United States, and with 17 industries/products for the other countries.

What time series is available?

Currently, the data in the FIGARO tables are available from 2010 to 2019 (period T – 24 months, T being the year of release) and as of 2021, they are continued as a Eurostat annual statistical product.

What is the methodology used?

For information, please see the page ‘Methodology’ in this section.

What is planned for the future?

With the May 2021 release, the FIGARO tables are part of a regular annual production process.

At the same time, the FIGARO project is running until 2023, in collaboration with the Joint Research Center (JRC). The project includes various analyses with the FIGARO tables. This project also provides: