A person's labour force status falls into one of three categories: employed, unemployed or outside the labour force. Eurostat uses the employment and unemployment definitions from the International Labour Organisation (ILO) . The labour force, which may also be referred to as active population, consists of employed and unemployed persons. An employed person is a person aged 15 and over who during the reference week performed work, even if just for one hour a week, for pay, profit or family gain, or alternatively had a job or business from which he/she was temporarily absent due to illness, holiday, industrial dispute or education and training. On the other hand, an unemployed person is not employed, currently available for work and actively seeking work. Thorough explanation of these concepts is available in an article on the EU-LFS methodology. The same definitions apply to young people just as they do to any other age group.

Figure 1 shows the EU-27 population of young persons 15-24 years old divided into three groups based on their labour force status, and its evolution from 2005 to 2019. The graph presents for each year the number of young people that were employed, unemployed and outside the labour force. It appears from the graph that youth unemployment has been decreasing from 4.5 million in 2005 to 3.5 million in 2008. It began to rise in 2009, before decreasing again since 2013 and reaching a new low of 2.8 million in 2019. Furthermore, the number of young persons outside the labour force in the period 2005-2019 was the highest in 2005 reaching 31.6 million and the lowest in 2019 with 28.1 million. 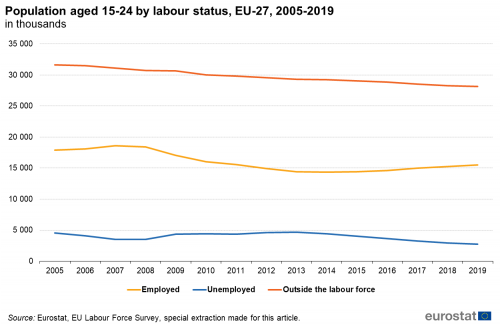 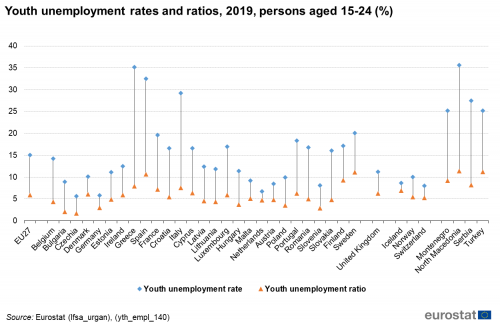 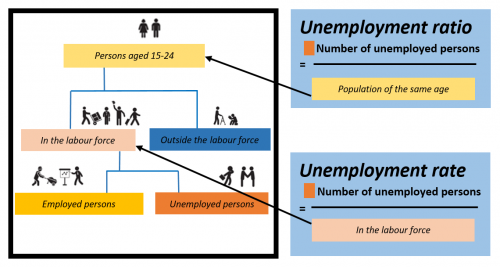 As explained above, unemployment rates and unemployment ratios differ because unemployment rates include in the denominator only the part of the population that is in the labour market. There is also a strong link between labour market participation and educational status, which becomes particularly clear when looking at young people's situation at different ages. This section analyses this issue in detail.

At 15 years of age, nearly 100 % of the population in the EU and its Member Sates are still at school. As the young grow older, many move into the labour market, becoming employed or unemployed, or remain outside the labour market. Not all young people make this transition at the same age, so there is a gradual rise in the number of the young people on the labour market. Figure 4 below shows the proportion of young people in formal education and/or on the labour market at each year of age (data for EU-27, 2019). The persons in formal education are colour-coded in light blue, and those not in education are colour coded in orange. There is a steep rise in the labour market participation, from 5 % at age 15 to 72 % at age 24. This steep increase explains the difference between the youth unemployment rates and youth unemployment ratios, introduced in the previous section. This is a distinctive feature of the young population and it has no equivalent at other ages, except for the gentle decrease in labour participation by older workers as they retire. 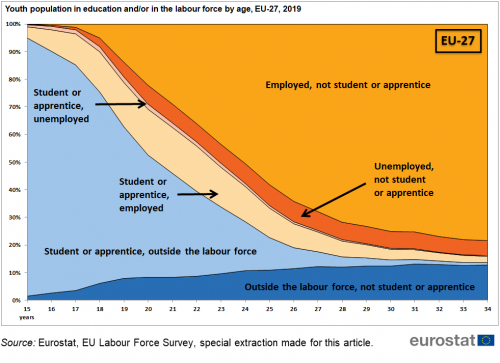 Figure 4 is based on EU labour force survey data and it counts all those who state they have been in formal education or training during the previous four weeks as being in education, and does not include people who participated exclusively in non-formal training sessions such as attending a course, a seminar or taking private lessons.

The effects of the 2008-2013 crisis on youth unemployment

Video 1 shows a sequence of charts such as Figure 4 with young persons 15-34 years of age in employment and/or formal education or none of the above, in the EU-27. The video covers all years ranging from 2005 to 2019 to capture the changes in the labour force status of the given population prior to, during and after the 2008-2013 crisis. An increase in youth unemployment was one of the outcomes of this economic crisis not only in countries that were severely affected such as Spain and Greece, but also the EU-27 as a whole. As indicated by the video, the number of young persons unemployed and not in education reached a highest peak in 2012 and 2013, decreasing considerably in the following years and reaching its lowest point in 2019. The proportion of the population simultaneously in education and on the labour market reached the highest point in 2008, gradually decreasing in the following years until increasing again in the last couple of years.

Video 1: Changes in the structure of the young population, EU-27, 2005-2019
Click the image for an interactive view of the data

Young people are a priority for the European Union’s social vision, and the crisis further highlighted the need to sustain the young human capital. In November 2009, the Council of Youth Ministers adopted the EU Youth Strategy for 2010-2018 which had two overall objectives: to provide more and equal opportunities for young people in education and in the labour market to promote the active citizenship, social inclusion for all young people. Recently, following the Council Resolution of 26 November 2018, the EU Youth Strategy 2019-2027 has been introduced with 11 European Youth Goals, among them quality employment set as one of the objectives.

The Open Method of Coordination supports the implementation of the strategy which should create favourable conditions for young people to develop their skills, fulfil their potential, work, and actively participate in society. In this framework youth statistics are an essential tool to support evidence-based policy-making in the various domains covered by the strategy.

Focus on young people has also been highlighted with the adoption of the Europe 2020 strategy back in June 2010. Quality education and training, successful labour market integration and more mobility of young people are key to unleashing all young people's potential and achieving the Europe 2020 objectives. Youth on the Move presents a framework of policy priorities for action at national and EU level to reduce youth unemployment by facilitating the transition from school to work and reducing labour market segmentation. Particular focus is put on the role of public employment services, promoting the Youth Guarantee scheme to ensure all young people are in a job, in education or in activation, creating a European Vacancy Monitor and supporting young entrepreneurs.